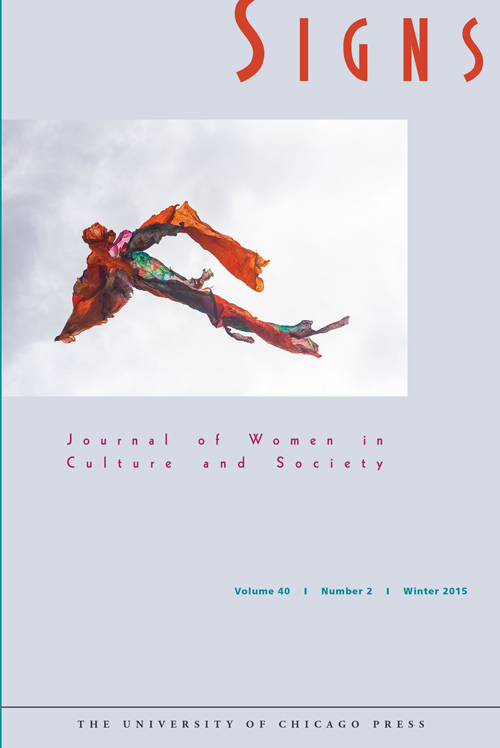 The cover of the Winter 2015 issue features Maya Freelon Asante’s Scattered to the Wind (2013). Photograph by Chris Charles.

The Winter 2015 issue of Signs begins with a comparative perspective symposium titled “Politics of the Sensing Subject: Gender, Perception, Art,” edited and introduced by Anne Keefe. The symposium is inspired by the new centrality of affective studies in feminist theorizations of subjectivity, embodiment, politics, and social change. The five essays in the symposium demonstrate the analytical value of foregrounding the affective and sensorial dimensions of encounters with art. In “Cultivating Perception: Phenomenological Encounters with Artworks” Helen Fielding turns to her own perceptual encounter with Brian Jungen’s People’s Flag in an exploration of phenomenology as a modality of feminist engagement with art. Next, Jenny Chamarette draws on phenomenology for an examination of “film’s relationship to experience.” Catheryn Vasseleu and Tal Dekel’s essays challenge the primacy of the visual in the encounter with art. Vasseleu focuses on the transformative power of touch in VALIE EXPORT’s performance Tap and Touch Cinema, while Dekel considers the performance art of Palestinian artist Anisa Ashkar, arguing that the power of the “lesser senses” of touch, taste, smell and sound can be mobilized as “an alternative feminist way of acting politically in the world” (279). The symposium concludes with Jui-Ch’i Liu’s exploration of Lee Miller’s war photography in relation to the feminine sublime, which “deconstructs the gendered binary opposition between proximity and distance” and “heralds a new ethics, based on a mobile body-to-body relationship between the spectator and war trauma” (318).

Conceptual, analytical, and empirical inquiries into the works of affects and emotions are also central to the articles included in this issue of Signs. In “The New Materialism and Sexual Difference,” Gill Jagger examines key tenets of new materialism through the works of Karen Barad, Vicki Kirby, Elizabeth Grosz, Stacy Alaimo, and Susan Hekman. The author argues that “Barad’s account of the material-discursive relation involves the active participation of both sides” (339–40), thus bypassing the conclusion that sexual dimorohism is inevitable and rendering biology as diverse, nonlinear, and dynamic.

Orna Donath’s article “Regretting Motherhood: A Sociopolitical Analysis” addresses an empirical and conceptual lacuna in motherhood studies. The in-depth interviews with twenty-three women constitute the starting point to an exploration of “the emotional and cognitive stance of regret over motherhood” (362). Donath argues that challenging “the institutionalization of motherhood as an untouchable experience with regard to regret” can enable new perspectives on “the ongoing inquiry into the politics of reproduction and motherhood” (363). Reproduction and affect constitute a key theme of “The Mating Life of Geeks: Love, Neuroscience, and the New Autistic Subject,” an article authored collectively by Angela Willey, Banu Subramaniam, Jennifer A. Hamilton, and Jane Couperus. By tracing the emergence of new representations of autism, the authors document a shift from a loveless subject to one who is “utterly capable of loving and being loved” (370) and argue that, in the course of this process, the autistic subject “is salvaged from the category of the necessarily unproductive and uncoupled” (386), whereas autism specter disorder becomes a site for the biologization of historical ideas about gender, race, and normative heterosexuality.

The next two articles approach questions of race, gender, and affect from n historical perspective. The question Why is Frances Ellen Watkins Harper not a legendary figure within American feminism in the same way that Sojourner Truth is? motivates Jen McDaneld’s engagement with these two nineteenth-century activists. McDanald argues that the historiographical construction of the 1869 “split” within the suffragist movement can provide an explanation for Harper’s erasure within the US feminism. The author concludes that Harper’s work can be read not only as “a deconstruction of the 1869 split and its ‘choice’ between race and gender but equally as a representation of the ways the framework itself effaces black women’s contributions to feminist theory” (411). In “Performative Affectivity and the Letitia Ernestine Brown Divorce Case” Shane Vogel turns his analytical lens to the affective registers of racial performativity. By reading the historical Brown v. Curtis divorce case alongside Stanley Cavell’s theorizations of performativity and Eve Kosofsky Sedwick and Silvan Tomkins’s work on affect, the author concludes that the coverage of Ernestine Brown’s divorce “expanded the affective script of miscegenation beyond the narrow range of shame” (422) by suggesting “the other side of racial performativity—blackness as passionate improvisation and race itself as a theater of the absurd” (435).

Sarah Hankins continues the exploration of the performative in her article “‘I’m a Cross between a Clown, a Stripper, and a Streetwalker’: Drag Tipping, Sex Work, and a Queer Sociosexual Economy.” Hankins’s work builds upon ethnographic fieldwork among gender performers in the Boston area and, by focusing on tipping practices of drag performance, she maps the terrain of an economy that represents an alternative to hegemonic sociosexuality, and simultaneously, reconfigures gendered power dynamics that are ascribed to sex work in dominant and scholarly discourses.

Also based on ethnographic work, Lalaie Ameeriar’s contribution takes a close look at a government-funded pilot project designed to assist foreign-trained nurses in becoming licensed in Toronto, Ontario. The author coins the term “pedagogies of affect” in order to describe and critique a training curriculum that aims to cultivate and reproduce racialized notions of femininity grounded in “Westernized notions of docility and deference” (479).

Finally, in “‘India Will Change You Forever’: Hinduism, Islam, and Whiteness in the American Empire” Shefali Chandra draws on Elizabeth Gilbert’s memoir Eat, Pray, Love, Nina Paley’s animated film Sita Sings the Blues, and Katherine Russell Rich’s memoir Dreaming in Hindi in order to examine a host of emerging elements in the relationship between the United States and India following September 11. While the remaking of the white woman through Hindu India “justifies the fragility and resilience of imperial whiteness” (508), Chandra argues that “the relationship proliferates endlessly: India is produced through the desires of the white woman, who is then regenerated by India and made well once more” (509).

The issue also includes reviews of new books on the intersections of race and class for women in the academy, the archival turn in feminism, cultural feminism, gender and sexuality regimes in the Caribbean region, and women addicted to methamphetamine.