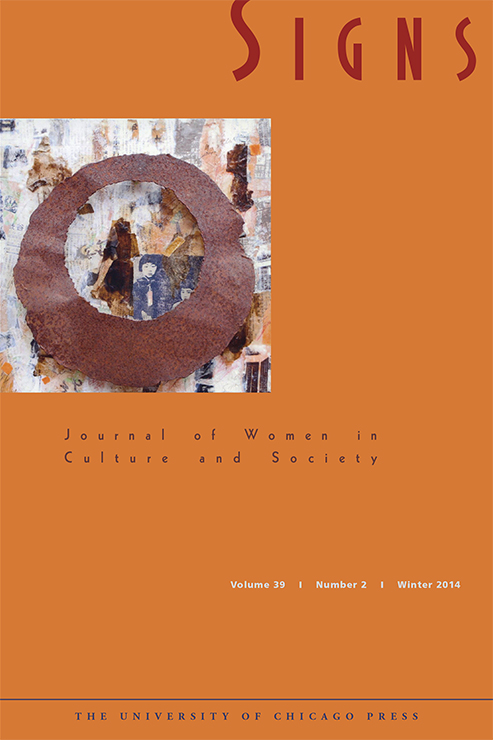 This issue of Signs begins with two articles analyzing the literature of Japanese American internment, Sarah Dowling’s “‘How Lucky I Was to Be Free and Safe at Home’: Reading Humor in Miné Okubo’s Citizen 13660” and Cynthia Wu’s  “Asian American Feminism’s Alliances with Men: Reading Hisaye Yamamoto’s ‘Seventeen Syllables.’” Dowling and Wu propose modes of reading that situate gender and race at the center of textual engagement and ultimately reveal political valences that have been overlooked by other critics.

Dowling argues for a textual engagement that does not “presume to know more about [the text] than it knows about itself” or attempt to “diagnose its truth from an unaffected and separate vantage point.” By allowing her reading “to be led by the text,” Dowling shows that Miné Okubo’s humorous visual and textual depictions of the Japanese internment camps during World War II “challenges critical conceptions of resistance and even of politics.” Wu’s reading of the short story “Seventeen Syllables” foregrounds Yamamoto’s critique of “the violence affecting Asian American men,” while most existing gender-sensitive criticism of Yamamoto’s work highlights “the multiple oppressions her female characters face.” Wu demonstrates that Yamamoto had formulated the “claim that the oppression of men of color is a feminist issue” long before gender debates emerged in Asian American literature.

The next two articles explore how the HIV epidemic has reshaped gender and sexual practices both among the Luo ethnic group in Western Kenya (Sanyu A. Mojola) and in the context of state-sponsored repression of sex workers in Zambia (Anna-Louise Crago). “Providing Women, Kept Men: Doing Masculinity in the Wake of the African HIV/AIDS Pandemic” is based on Mojola’s ethnographic and interview-based fieldwork. By exploring accounts of intimate relationships between widowed women and poor young men within the current economic crisis, Mojola shows that whereas widowed women are “effectively doing masculinity,” their practices of “pursuing and providing” for young men end up supplying the material resources men need in order to engage in “other sets of practices to prove their masculinity.” By doing so, they also reinstate patriarchal expectations of femininity for the next generation of women. In “‘Bitches Killing the Nation’: Analyzing the Violent State-Sponsored Repression of Sex Workers in Zambia, 2004-2008,” Crago examines the repressive policies used against sex workers, designed to curb sex work and “protect the nation from HIV,” which include curfew legislation, detention, scapegoating sex workers for HIV, and police violence. Through in-depth interviews with Zambian sex workers and analysis of media and institutional records, Crago shows that the value that the Zambian state places on the expulsion of sex workers from the national body derives from recent shifts within both national and transnational policy contexts.

Talia Mae Bettcher’s “Trapped in the Wrong Theory: Rethinking Trans Oppression and Resistance” reevaluates the two prevailing models of transsexuality—the wrong-body model and the transgender model—finding existing articulations of both unsatisfactory. Drawing from María Lugones’s “model of multiple meanings” and “recent literature on the transphobic representations of trans people as deceivers,” Bettcher reanimates the resistant potential of the wrong-body model from a transfeminist perspective, arguing that a reorganized version of this model has the capacity to resist the principle of reality enforcement and its centrality to “dominant ways of doing gender.”

In “Adopting Difference: Thinking through Adoption by Gay Men in Ontario, Canada,” Margaret F. Gibson considers how the rhetoric, legislative practices, and public debates surrounding adoption by gay men divert attention away from the ongoing inequities that underlie the vocabulary of adoptable children’s “need” for “rescue.” The author shows that discursive constructions of rescue, respectability, and diverse family formations uphold “neoliberal privatization and existing social hierarchies.”

Alison McKim’s “Roxanne’s Dress: Governing Gender and Marginality through Addiction Treatment” compares a mandated addiction treatment program at an alternative-to-incarceration facility with an all-women residential addiction treatment program with no ties to the penal system. By developing an intersectional analysis of her ethnographic data, McKim finds that race, class, and gender distinctions are built into understandings of addiction and crime, as well as into “the discursive and institutional organization of the addiction treatment field.”

In “Threatened Identities and Gendered Opportunities: Somali Migration to America,” Cawo Mohamed Abdi draws on her ethnographic work with Somali migrants in Minnesota in order to explore how the socioeconomic circumstances of migrants’ new settlement shape the terms of “gender bargains.” By focusing her analysis on family conflicts that were subsequent to migrants’ interaction with new institutions, such as the welfare system and the police, Abdi finds that the context of reception along with the migrants’ religious beliefs reify patriarchal ideologies and thus “curtail women’s opportunities to resist gender subordination.”

Rachel E. Johnson compares two debates on the issue of abortion that took place in the South African Parliament in 1975 and 1996. By attending not only to the speeches of the Members of Parliament, but also to the MPs’ ritualized “interjecting, interrupting, jeering, clapping, laughing, and […] humor,” the author detects the “ghostly presence” of a white, masculine institutional somatic norm. In spite the high numbers of women MPs in the South African Parliament, this masculine bodily norm “can linger long after the men who first constituted it have departed.”

Finally, Laura Gillman proposes a comparative reading of Mayra Montero’s novel In the Palm of Darkness and Cristina Garcia’s The Agüero Sisters in order to articulate a hemispheric decolonial feminist critique of Western systems of knowledge, particularly of “their mechanisms for reproducing asymmetrical power relations in the Americas.” Drawing on Lugones, Gillman argues that when read through a hemispheric decolonial feminist lens, the two novels’ narratives of travel and migration render visible the dialectical quality of the encounters between Anglo-European and American subaltern modes of being, and, most importantly, reveal a subaltern perspective on the histories of these encounters.

The issue also includes reviews of new books on feminism, imperialism, and sexuality in Japan; new directions in trans studies; the politics of transracial and transnational adoption; German feminisms; and sustainable livelihoods.

“How Lucky I Was to Be Free and Safe at Home”: Reading Humor in Miné Okubo’s Citizen 13660
Sarah Dowling

Haunted by the Somatic Norm: South African Parliamentary Debates on Abortion in 1975 and 1996
Rachel E. Johnson

Inter-American Encounters in the Travel and Migration Narratives of Mayra Montero and Cristina García: Toward a
Decolonial Hemispheric Feminism
Laura Gillman