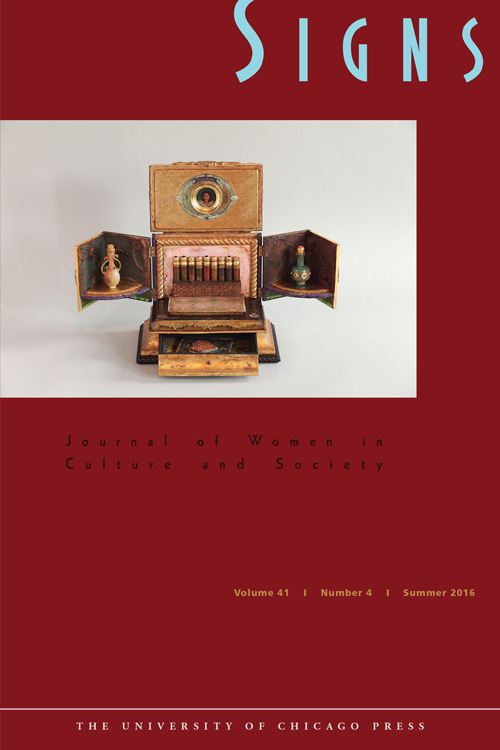 The cover of the Summer 2016 issue of Signs features Renée Stout’s Erzulie’s Arsenal (2013).

The summer 2016 issue of Signs (vol. 41, no. 4) is now available and features the call for papers for a special issue on Displacement, guest edited by Serena Parekh and Denise Horn.

The issue opens with James Bliss’s “Black Feminism Out of Place,” which argues that recent critiques of intersectionality erase Black women from the historical and scholarly record. Rereading the work of Kimberlé Crenshaw, Hortense Spillers, and others, Bliss argues that intersectionality belongs to a tradition of radical Black feminist theorizing on placelessness and absence in which “nonspace” can be the site of invention and which represents an excess to the limits of feminism’s institutionalization.

Jennifer C. Nash’s article, “Unwidowing: Rachel Jeantel, Black Death, and the ‘Problem’ of Black Intimacy,” extends the conversation on race and state violence by looking to the 2013 trial of George Zimmerman, who was accused (and acquitted) in the murder of African American teenager Trayvon Martin. Nash’s essay focuses on the testimony of Martin’s purported girlfriend, Rachel Jeantel. Arguing that black pain and dispossession are often articulated through the figure of the civil rights widow, Nash demonstrates how such women come to represent “respectable” black mourning and productive national grief. Jeantel, by contrast, was effectively “unwidowed,” as both Zimmerman’s defense and the media sought to undermine her credibility and render her relationship with Martin – and black intimacy writ large – illegible according to traditional scripts.

Representing one of Signs’ new Feminist Public Intellectuals Project initiatives is the inaugural installment of “Ask a Feminist,” wherein Sarah J. Jackson interviews scholar and activist Cathy J. Cohen on feminism and racial justice movements. Over the course of their discussion, Jackson and Cohen discuss the #BlackLivesMatter movement, the barriers and bridges between academics and activists, and the intersection of race and gender in relation to state violence. (An open-access version of this interview is also available online.)

Drawing on detailed observations of three women’s organizations in India, Poulami Roychowdhury’s “Desires, Rights, Entitlements: Organizational Strategies in the War on Violence” interrogates how, precisely, feminist organizations get feminist work done, and what these strategies say about gender and power in an unequal society. Roychowdhury identifies three distinct models of women’s empowerment within the NGO sphere, cautioning that attempts to reform individual women’s desires often obscure structural forms of inequality.

In “Gender, Nation, and the Politics of Shame: Magdalen Laundries and the Institutionalization of Feminine Transgression in Modern Ireland,” Clara Fischer argues that in post-Independence Ireland, national identity was rooted in notions of moral purity and in efforts to erase “impure” women from the body politic. A collusion between the state and Catholic Church, utilizing a politics of shame, created punitive institutions such as the Magdalen laundries in order to isolate women and children who posed a threat to the national image of purity and to suppress any evidence that challenged national mythology.

Taking the Indian women’s journal Manushi as a primary text, Kanika Batra’s “Creating a Location Counterpublic: Manushi and the Articulation of Human Rights and Sexuality from Delhi, India,” argues that the publication has played a critical role in placing women’s sexuality at the forefront of national concerns. While shying away from overt discussion of the rights of sexual minorities in favor of focusing on (hetero)sexual violence, Batra notes, the journal has nevertheless created a viable counterpublic through which further discussion of nonnormative sexuality becomes possible.

Lori Marso’s “Perverse Protests: Simone de Beauvoir on Pleasure and Danger, Resistance, and Female Violence in Film” focuses on films by Chantal Akerman, David Fincher, and Lars von Trier in which women’s agency is linked to both sexuality and violence. Marso uses Beauvoir’s theorization of “perverse protests” to demonstrate how female characters respond to feelings of boredom, anger, and frustration through violent outbursts. Marso finds that resistance to oppressive patriarchal discourse may be enacted, both consciously and unconsciously, through acts of self-destruction, violence, and disorder.

Angelique Szymanek also explores the relationship between art, violence, and resistance in “Bloody Pleasures: Ana Mendieta’s Violent Tableaux.” Looking beyond Mendieta’s tragic death, Syzmanek places the subjectivity of the viewer at the forefront of her analysis. While many scholars see utopian possibilities in the politics of witnessing, Syzmanek instead argues that Mendieta’s work can be read as implicating the viewer of in the violence of looking, forcing an acknowledgement of desire and disgust as congruent experiences.

In “The Sexual Politics of Intelligent Design,” Sharon Woodill considers both the similarities and the key distinctions between Evangelical Christion notions of intelligent design and feminist critiques of scientific discourse. While both challenge the notion of science as an apolitical arbiter of truth, Woodill argues, the political thrust behind intelligent design is antithetical to feminist politics, as its commitment to biological essentialism is used to rationalize social injustice and repressive sexual politics.

Finally, Emily Starr and Michele Adams interrogate the relationship between technology, globalization, and masculine hegemony in “The Domestic Exotic: Mail-Order Brides and the Paradox of Globalized Intimacies.” They conclude that rapidly developing technology in an increasingly globalized world is paradoxically used to promise a return to a prefeminist domestic gender arrangement and the patriarchal nuclear family ideal.

This issue closes with reviews of a variety of recently published books on critical terms in gender studies; feminism, neoliberalism, and NGOs; sexuality and history; the history of rape; disability, race, and gender; reproductive justice and Native American women; and the history of women’s health care.