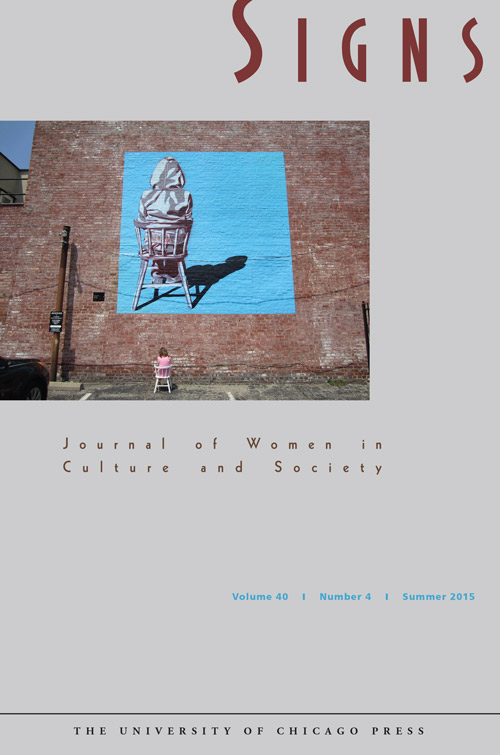 The issue opens with Mimi Thi Nguyen’s “The Hoodie as Sign, Screen, Expectation, and Force,” a meditation on the valences of the hoodie in the aftermath of Trayvon Martin’s murder. Through the hoodie, Nguyen explores the colonial racial optics that schematize the visual field and the availability of black bodies to state violence. “Yielding some sense of racism’s endurance because of its incoherences, correspondences, and movements in and through things, things freighted with an excess of those histories that commit some beings to premature death, the hoodie as a sign, a screen, an expectation, and a force uncovers some of the powers that threaten black life in this moment.”

Jennifer Anne Boittin’s article, “‘Are You Trying to Play a White Woman?’ La Mère Patrie and the Female Body in French West Africa,” illuminates the dynamics among black African and white French women through the writings of Germaine Le Goff, the headmistress of the first ecole normale for girls in French West Africa. Boittin points both to the ways in which French imperialism depended on gendered familial tropes and to how black women challenged and overturned colonial lines of power.

Drawing on retrospective participant observation, interviews, military documents, and other reports, Lorraine Bayard de Volo and Lynn K. Hall’s “‘I Wish All the Ladies Were Holes in the Road’: The US Air Force Academy and the Gendered Continuum of Violence” analyzes the prevalence of rape and sexual violence in this “total institution.” The authors extend the concept of a “continuum of violence” to include quotidian sexual harassment, militarization and the normalization of aggression, and the institutional features that reinforce violence, arguing that the concept of a “gendered continuum of violence” can be applied and extended to research in a variety of institutional contexts.

Liz Montegary continues the critical analysis of the US military in her “Militarizing US Homonormativities: The Making of ‘Ready, Willing, and Able’ Gay Citizens.” Delineating “the militarizing and masculinizing effects of anti-[Don’t Ask, Don’t Tell] organizing during the War on Terror,” Montegary focuses on the Human Rights Campaign’s selection of Eric Alva as a spokesperson in the effort to repeal the Don’t Ask, Don’t Tell policy. She simultaneously critiques the assimilatory politics of anti-DADT activism while also examining how Alva’s Latino identity and disability have the potential to “open space for radically reorienting public conversations about sexuality, military service, and US citizenship.”

Miranda R. Waggoner’s “Cultivating the Maternal Future; Public Health and the Prepregnant Self” closely examines the US Centers for Disease Control and Prevention’s “Show Your Love” campaign. Waggoner demonstrates that this recent public health effort effectively extends maternal responsibility and “ethos of … self-sacrifice,” as well as attendant forms of surveillance and risk management, to all young women, whether or not they are pregnant or plan to become so. Furthermore, Waggoner shows that the campaign produces a racialized division between “planners,” who are represented as white, and “non-planners,” a category primarily attached to women of color.

In the issue’s final article, Lara Cox analyzes stand-up comedians’ use of irony in jokes about rape. Departing from Daniel Tosh’s 2012 outburst at a comedy club, Cox examines many stand-ups’ jokes to ask, “Can a rape joke ever work subversively?” While many comics deploy ironic stances in their rape jokes, they often reinforce aspects of rape culture. Cox does find, however, that certain jokes can perform a feminist destabilization of rape culture.