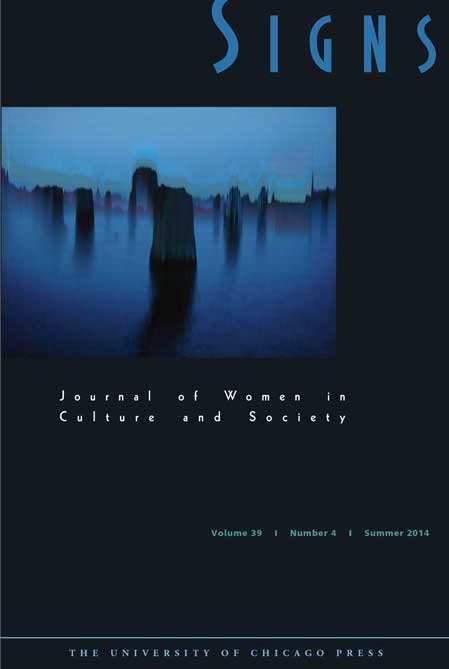 The Summer 2014 issue features Rosa Menkman’s “Shattered Horizons,” a video still from The Collapse of PAL (2010)

The Summer 2014 issue of Signs (available on JSTOR) begins with a comparative perspective symposium on the theme of “Gender, Media, and Social Change,” edited by Christina Dunbar-Hester. Mahboubeh Abbasgholizadeh opens the symposium with an exploration of how the Iranian women’s movement turned to virtual spaces to forge connections between different social groups and to bypass the restrictions imposed on the public sphere by the authoritarian regime of Mahmoud Ahmadinejad. In “The Gay Movement in China: Legacy and New Media,” Jin Cao and Xinlei Lu trace the genealogical links between the gay movement in China and the legacy of Confucianism, the post-1980s market-oriented economic reforms, the AIDS crisis, and ultimately the expansion of the Internet and other new information and communication technologies. Drawing on his in-depth ethnographic study of a progressive public middle school in New York City, Christo Sims analyzes the coconstitutive interactions among technology, gender, race, and class. Sims shows that educators and privileged parents shaped an educational environment that “facilitated and legitimized students who enacted masculinities rooted in game culture” while boys of color “who enacted masculinities rooted in more canonical forms of boy culture” were disproportionately disciplined and “eventually purged” from the school.

Two of the articles in the symposium turn their analytical lenses to politicized modes of information dissemination. Tania Pérez-Bustos’s “Of Caring Practices in the Public Communication of Science: Seeing through Trans Women Scientists’ Experiences” examines the online practices of scientific knowledge communication employed by the director of Humboldt Institute in Bogotá, trans woman biologist Brigitte Baptiste. Pérez-Bustos argues that an ethos of care could potentially transform the public communication of science from a process that imagines the public communication of science not as a transmission of information from neutral knowledge producers to infantilized publics but as an encounter bearing the “potential to open up our imagination regarding how we understand science and those who perform it.” Caroline Victoria Wamala’s “Theater, Gender, and Development: Merging Traditional and New Media to Address Communication Challenges in Uganda” builds on the author’s ethnographic work with farmer communities from Uganda and with ARRIN, a Kampala-based Ndere theater troupe.  Her analysis unveils  the fact that ARRIN’s fusion of music, dance, drama, and information technologies has empowering effects, by “making information available to everyone,” as well as disempowering ones, by strengthening the preexisting “social power structure.”

In “On Media, Social Movements, and Uprisings: Lessons from Afghanistan, Its Neighbors, and Beyond,” Wazhmah Osman intervenes into contemporary debates in media and communication studies regarding technological determinism, particularly in relation to the mobilizing role attributed to digital media in the context of contemporary uprisings and social movements. Osman turns to an analysis of Afghan television in order to foreground contestations of gender regimes through media, as well as the agency of and risks undertaken by Afghan women when speaking to “the misogyny of conservative groups and to the international community.” Finally, by tracing the trajectory of gender-specific policy-making in the Canadian information and communication technology sector during the past two decades, Leslie Regan Shade identifies a need for a clearer focus on “social inclusion” in relation to “systemic issues of race, class, and gender.”

Cadence Kinsey’s article continues the theme of gender and media with an exploration of the art practice of Nell Tenhaaf. By turning to Tenhaaf’s works Species Life, In Vitro (The Perfect Wound), and Push/Pull, Kinsey theorizes possibilities for reconceptualizing the relationship between bodies and information technologies in terms that enable the “continual negotiation with the contingencies of culture, capital, and technology,” and she makes critical interventions into feminist debates about binary and digital representation. Rose Brister’s “Placing Women’s Bodies in Eran Riklis’s The Syrian Bride” demonstrates the significance of gender and sexuality analytics for the fields of media studies and cultural geography. By rendering women’s bodies as “signifiers of spatial relations,” Brister argues, the work of this Israeli filmmaker allows feminists “to imagine spaces relationally through an affective linking of here and elsewhere” and to theorize the significance of women’s bodies in the production of geographic scales, the collisions between them, and instances of scale jumping.

The following two articles turn to analyses of the Internet and social media. Drawing on instant messenger interviews conducted with lesbian- and queer-identified girls, as well as on visual and textual analyses of the girls’ MySpace pages, Adriane Brown and Mary E. Thomas use Judith Butler’s recognition theory to argue that their subjects’ authorial digital agency is limited by “powerful normative discourses of sexual devaluation” and by “postfeminism and hegemonic white consumption ideals.” In a different vein, Clare Daniel’s “‘Taming the Media Monster’: Teen Pregnancy and the Neoliberal Safety (Inter)Net” examines the National Campaign to Prevent Teen and Unplanned Pregnancy’s construction of teen sexuality as an “urgent target for discipline and management.” This campaign, grounded in individualistic, market-based approaches to social welfare, constructs adolescents as “impulsive, naïve, media savvy, trend obsessed” subjects, while the distribution of “attractively packaged information … via a privatized cybernetwork” is presented as a solution to the problem of teen pregnancy.

Tamika L. Carey continues the critical engagement with film in her analysis of the rhetoric of healing in Tyler Perry’s films Diary of Mad Black Woman and Madea’s Family Reunion. Carey argues that Perry’s representation of healing and his conceptions of self, faith, and futurity mark black women’s pain as a commodity and construct black women as students receiving lessons that ultimately “reinforce gender ideologies and reify patriarchal constructions of family and home.”