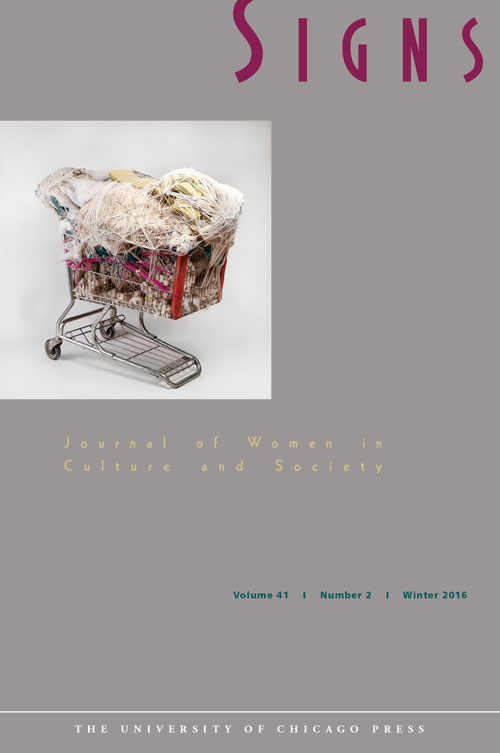 The cover of the winter 2016 issue of Signs features artwork by Judith Scott.

The winter 2016 issue of Signs (vol. 41, no. 2) features the call for papers for the 2017 Catharine Stimpson Prize for Outstanding Feminist Scholarship. Submissions are due March 1, 2016.

The issue begins with Ara Wilson’s “The Infrastructure of Intimacy.” By shedding light on the connections between the intimate and the infrastructural, Wilson proposes a new rubric for excavating material-symbolic assemblages of power. Using the examples of bathrooms and telephones, as well as instances of infrastructure’s failures, Wilson demonstrates the critical resources that studies of infrastructure can bring to feminist and queer analysis.

Johanna Oksala’s article considers Michael Hardt and Antonio Negri’s conception of “affective labor” in light of feminist theory and politics. Attending to early Marxist feminist analyses as well as contemporary reconfigurations of the gendered divisions of labor, Oksala argues that feminists who employ the concept need to develop strong distinctions among forms of affective labor.

In “Before Bandung: The Anti-Imperialist Women’s Movement in Asia and the Women’s International Democratic Federation,” Elisabeth Armstrong reexamines the historiography of the international women’s movement by closely examining the 1949 Conference of the Women of Asia. While the Bandung Conference of 1955 has been widely celebrated, Armstrong’s examination of the earlier conference provides an important window onto the development of leftist, internationalist, anti-imperialist feminism among women of the global South while demonstrating that it cannot be collapsed into a single “third world feminism.”

Cressida Heyes offers a phenomenological analysis of the harms of rape while unconscious. Heyes situates her study of sexual assault within a phenomenological inquiry into what it means to sleep or to lose consciousness, and she demonstrates that sexual assaults in which victims are unconscious result in victims having difficulty reconstituting themselves as subjects and engaging multidimensionally with the world.

In “Feminist Philosophy and Prenatal Death,” Victoria Browne addresses a neglected area of philosophical inquiry, which tends to presume that pregnancy results in a living child. In her examination of prenatal death, Browne develops a relational model to account for what is lost in prenatal death and the grief that can ensue while also drawing on the ethics of intimacy to reaffirm a pro-choice position.

Gili Hammer draws on her ethnographic research conducted with blind women in Israel to examine blind women’s experience of the visual, focusing particularly on their resistance to and manipulation of “the gaze.” Using a life-history approach, Hammer provides textured accounts of blind women’s agency, combining insights from disability studies and feminist theories of the gaze.

Finally, Amanda Wise’s “Contested Images of Rape” examines the intersections of gender and nation in cinematic representations of sexual violence committed during the second Sino-Japanese War, especially the Nanjing Massacre. Contrasting Chinese and Japanese films, Weiss finds striking differences in their approaches to the cultural memory of sexual violence but a shared focus on national myths of masculine honor.

The issue also contains reviews of new books on mothering and feminism (by Eileen Boris and Mary K. Trigg); the influence of sexology and its organization of knowledge (by David Rubin); incarcerated women and women in halfway houses (by Allison McKim); and Vladimir Putin and gender and political legitimacy in Russia (by Janet Elise Johnson).