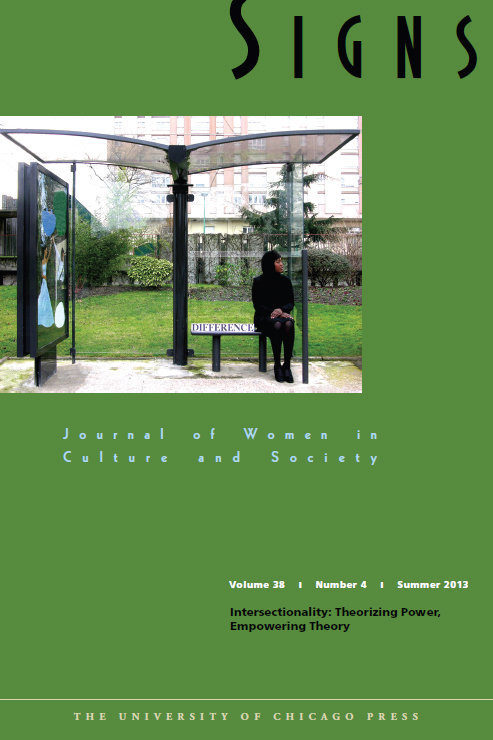 Intersectionality has become one of feminist and critical race theory’s most generative concepts. The Summer 2013 issue of Signs, Intersectionality: Theorizing Power, Empowering Theory, guest edited by Sumi Cho, Kimberlé Williams Crenshaw, and Leslie McCall, provides a timely and critical assessment of this pathbreaking concept. Since its coinage in Crenshaw’s work in the late 1980s, intersectionality has been taken up by scholars and activists across the disciplines and around the globe. This thematic issue of Signs brings together numerous strands of intersectional scholarship, simultaneously taking stock of the diverse field of intersectionality studies and forging new directions for the production of future insurgent knowledges.

The next two articles examine the intersectional dynamics of social movements through detailed case studies of particular organizations. “Intersectionality as a Social Movement Strategy,” by Jennifer Jihye Chun, George Lipsitz, and Young Shin, details how for Asian Immigrant Women Advocates, “an intersectional optic on social movement struggles creates insurgent identities that are dynamic and dialogic, more fluid and flexible than single-axis approaches.”  Anna Carastathis’s contribution turns to the work of Somos Hermanas to illuminate what is opened up by viewing identity categories as coalitions, as Crenshaw suggested in her early work on intersectionality, transforming the possibilities for identity politics.

Turning to an analysis of the institutional politics and dynamics of theory itself, Chandra Talpade Mohanty’s “Transnational Feminist Crossings” reflects on the travels of her own theorizing, finding that neoliberal trends within the academy have defused insurgent ideas and transformed “systemic projects of resistance into commodified, private acts of rebellion.” In “To Tell the Truth and Not Get Trapped,” Barbara Tomlinson identifies recurring rhetorical frameworks and tropes that appear in critiques of intersectionality, demonstrating how these rhetorical distancings from intersectionality are ultimately “damaging to feminist antisubordination scholarship and activism.” Providing an account of the methodological innovations that intersectionality has made possible, Catharine A. MacKinnon details how this concept “focuses awareness on people and experiences . . . that, in monocular vision, are overlooked” and, in so doing, has enabled crucial interventions in the law, both in the United States and internationally. Dean Spade closes the issue with an impassioned call to abandon single-axis frameworks in favor of one that is alert to the intentions and practices behind population control, criticizing reform-oriented strategies for social change that rely on formal legal equality and instead advocating radical projects to dismantle settler colonialism, heteropatriarchy, white supremacy, ableism, and xenophobia.

The issue thus offers a snapshot of the dynamic and expanding disciplinary, geographical, and theoretical range of intersectionality studies. It stands as a testament to the vitality of the field, the potential for collaboration it provides, and the manifold ways intersectionality can be understood and practiced.

From Patriarchy to Intersectionality: A Transnational Feminist Assessment of How Far We’ve Really Come
Vrushali Patil

To Tell the Truth and Not Get Trapped: Desire, Distance, and Intersectionality at the Scene of Argument
Barbara Tomlinson

Intersectionality as Method: A Note
Catharine A. MacKinnon