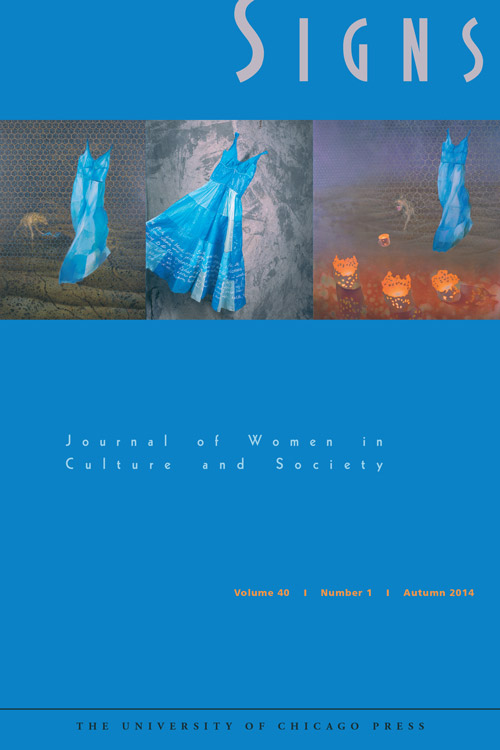 The most recent issue of Signs (available on JSTOR) begins with a Comparative Perspectives Symposium on “Gendered Bodies in the Protest Sphere,” edited by Miranda Outman-Kramer and Susana Galán. Inspired by the wave of grassroots protests that swept the world beginning in 2011, this symposium sets out to consider the politics of the protesting body—a body that is inevitably gendered, raced, and classed. As contributor Karina Eileraas writes, “Our bodies inhabit the borderlands of the natural and the constructed, the marvelous and the mundane. Neither biological givens nor passive sites of inscription, they represent stunning political interventions, living canvases, and endlessly fascinating achievements in time and space…. When bodies hit the streets en masse to oppose the status quo, their power can appear either infinitesimal or so spectacular as to arrest onlookers in their tracks. By suspending audiences between past and future, demonstrating bodies become emblems of what is and what might be, ‘laboratories for alternative futures.’”

In the opening article, Athena Athanasiou considers the formation of precarious bodies—subjected to “the loss of jobs, pay cuts, unemployment, pension reductions, poverty, evictions, loss of dignity, and dissolution of the public health care system” under Greece’s austerity regime—and limns the “new modes of agonistic embodied citizenship” that are posing a challenge and an alternative to the regime of market logic. Considering a wave of protests sparked by a very different event, Ratna Kapur explores a set of distinctly gendered uprisings that was sparked, in part, by the gang rape and murder of a young woman on a bus in Delhi in December 2012. Zakia Salime considers a very different body politics of protest, that of Tunisian blogger Amina Sboui, who posted two topless photos of herself on the Internet, thereby marking “the visual memory of the revolutionary square, inviting a new power/knowledge configuration and a new politics of remembering along sexualized scripts, rather than moralizing ones.” In contrast, Sherine Hafez situates an iconic instance of unwilling nudity, the image of the “Girl in the Blue Bra”—“an unconscious young female body, stripped down to her jeans and bra and being … viciously kicked in the abdomen by a soldier’s heavy boot”—at the center of her exploration of the bodily politics of the Egyptian Revolution.

In her discussion of Nepal’s People’s War, Rama Lohani-Chase explores a sphere in which the protesting body is militarized, in which women “lived under hard conditions, entered a domain that was considered a male prerogative, wore clothes with associations of power and masculinity … rendering gender a significant lens through which to examine the efficacy and modalities of revolutionary war.” Stella Nyanzi’s account, meanwhile, presents a protesting body that is at once explicitly queer and in grave danger: Uganda’s “Gay Beach Pride” parade, which was mounted in the face of the nation’s life-threatening Anti-Homosexuality Bill.  And in “Sex(t)ing Revolution, Femen-izing the Public Square,” Karina Eileraas examines the very different politics of the (unclothed) protesting body in the revolutionary context of Tahrir Square, on the one hand, and in alliance with the anti-Islamist group Femen, on the other.

Considering the Occupy movement in the United States, Hannah Appel presents an ethnography of the Alternative Banking Group, a constellation of bankers, analysts, and economists who converged within the space of Occupy to envision a finance system based on principles of justice and who “had always felt like outsiders, whether because they were women, mothers, black, gay, or moral conservatives.” In her account of the protests that spilled into the streets of Spanish cities in 2011, Joana García Grenzner describes a veritable sea of tides, blocs, and pickets: “green tides (Platform of People Affected by Mortgages), yellow tides (education), violet tides (equality and gender equity), orange tides (social services), red tides (culture), garnet tides (forced migration due the economic situation), and even black tides (mining); blocs of migrants demanding rights and documents for everyone, fembloks…, babybloks…, Indignant Whores protesting against police and administrative persecution, antirepressive rearguards, iai@flautas (grandparents), cronicoflautas (people with chronic illnesses), and so on.” And Amana Mattos contrasts three very different, and differently gendered, protests: a teacher’s strike, a SlutWalk, and the actions of the anarchist Black Bloc, which converged around the hosting of the World Cup in Rio de Janeiro in 2014. Grenzner and Mattos’s articles are also available in Spanish and Portuguese, respectively, on JSTOR. Finally, Rouba Mhaissen situates her account in the context of a protest’s tragic aftermath—the Syrian uprising turned civil war—and finds a story of resilience and courage: a young woman’s life in a refugee camp in Jordan and the transformations of gender and family relations she has enacted.

The aftermath of war forms the basis for an extraordinary cluster of articles, Women in Postconflict and Postgenocide Societies, guest-edited by Pumla Gobodo-Madikizela, Jennifer Fish, and Tamar Shefer. In their introductory article, Gobodo-Madikizela, Fish, and Shefer affirm that “violence against women is not a problem of ‘the past.’ There are continuities between regimes of violence during organized political conflict and persisting violence against women in the postconflict era of democratic governance.” Writing of the astronomically high rates of rape and sexual violence in postapartheid South Africa, Louise du Toit considers four interpretive frames that purport to explain the incidence of gendered violence in postconflict societies and meticulously examines and deconstructs each one. In “The Women and Peace Hypothesis in Peacebuilding Settings,” Karen Brounéus tests the belief that women hold more pacific or compromising attitudes than men. Her findings explore the very different experiences of women and men during and following the 1994 genocide in Rwanda, and they ultimately reveal startling results. Finally, Hannah Britton and Lindsey Shook present a sobering account of the gulf between progressive legislation and gender-based violence in their study of postwar Namibia, a nation with progressive, model antirape legislation and yet with very high rates of sexual violence.

In “The Veil, Desire, and the Gaze,” Banu Gökarıksel and Anna Secor apply a Lacanian lens to question of veiling fashion in Turkey, exploring “the interplay between the veil, the gaze, and the subject by showing that the veil is in fact visible and that this visibility and its governance are part of the formation of pious, desiring subjects,” and they address their ethnographic research to questions of agency and governmentality. A very different question of agency animates Chaitanya Lakkimsetti’s “‘HIV Is Our Friend’: Prostitution, Biopower, and the State in Postcolonial India,” which explores the changing role of Indian sex workers, who once “faced legal regulations that criminalized and stigmatized them” but “have now become important partners in the public health projects of the Indian state.”

And, finally, Kirsten Leng’s “Permutations of the Third Sex” presents a historical account of three antimaternalist feminists who wrote within the emerging field of sexology during the fin-de-siècle era and whose writings appear anachronistic in some respects and, in others, prefigure contemporary queer theory. The issue also features book reviews, covering Judith Butler and Athena Athanasiou’s conception of dispossession, sexual violence in contexts of conflict and genocide, and feminism and queer theory in a South Asian frame.