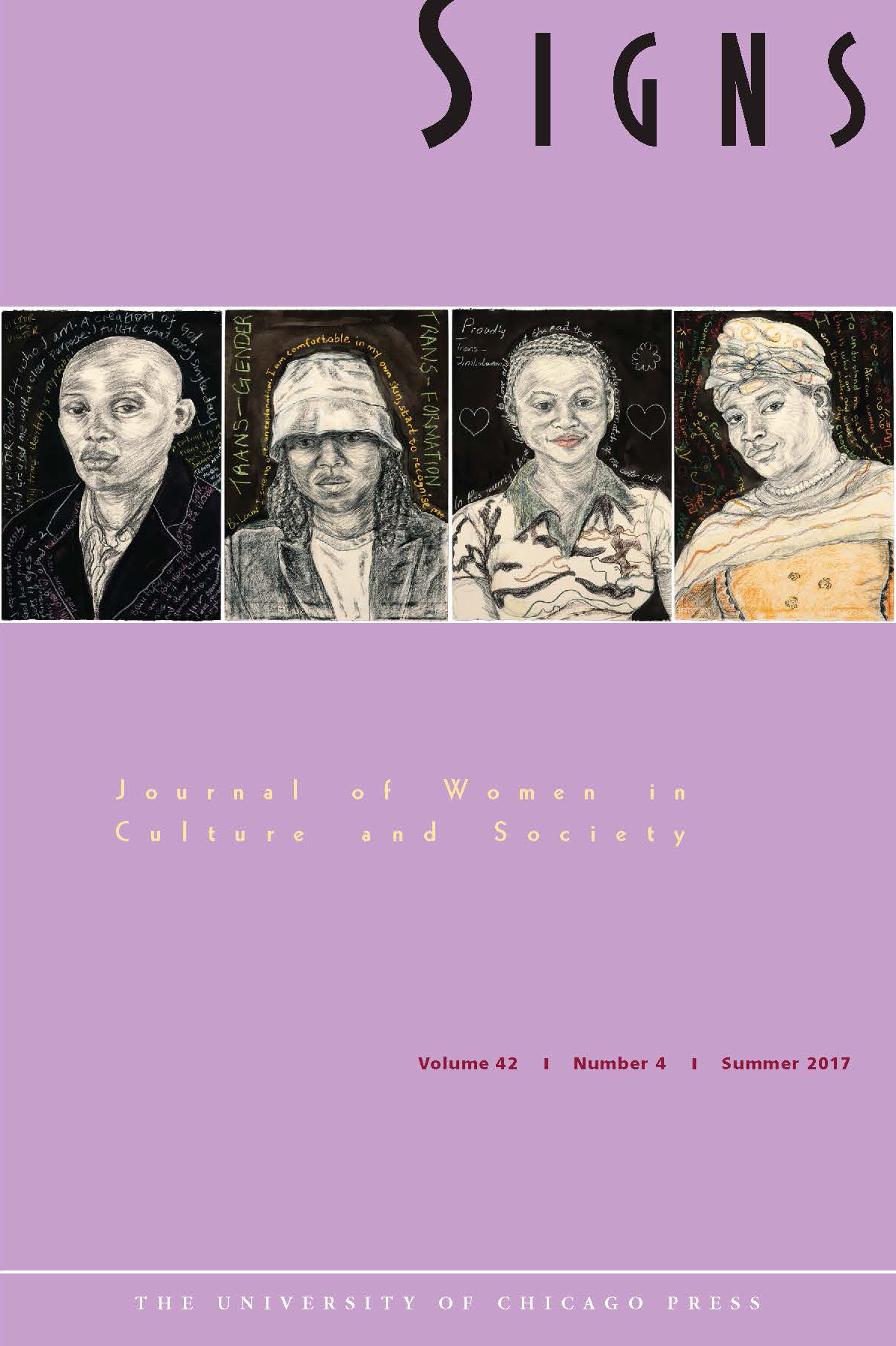 The cover of the Summer 2017 issue of Signs features Gabrielle Le Roux, in collaboration with trans activists, Proudly African & Transgender.

The University of Chicago Press and Signs: Journal of Women in Culture and Society are pleased to announce that, for the first time, the Catharine Stimpson Prize for Outstanding Feminist Scholarship is being awarded to two co-winners in 2017: Cameron Awkward-Rich, a PhD candidate in the Program in Modern Thought and Literature at Stanford University, and Meghan Healy-Clancy, an assistant professor of history at Bridgewater State University and a nonresident fellow at the Du Bois Institute at Harvard University’s Hutchins Center for African and African American Research. Named in honor of the Founding Editor of Signs, the Catharine Stimpson Prize is designed to recognize excellence and innovation in the work of emerging feminist scholars. The prizewinning essays have just been published in the Summer 2017 issue of Signs, which also contains numerous other articles.

Awkward-Rich’s essay, “Trans, Feminism: Or, Reading like a Depressed Transsexual,” makes a crucial contribution to trans feminist theory and to ongoing debates about trans feminism. What does it mean, Awkward-Rich asks, that on both “sides” of the debate, that the failure to fully integrate the terms trans and feminism is viewed and experienced as a form of annihilation? Rather than working toward an integration, however, Awkward-Rich, draws on disability theory, using the figure of “the depressed transsexual” as a reading position from which to examine the possibility of living with the “bad feelings” produced by the lack of integration. Ranging through debates about “TERFs” (trans-exclusive radical feminists), articulations of transfeminism, and trans and female masculinities, Awkward-Rich’s lucidly written article challenges developing orthodoxies within trans, feminist, and transfeminist theory and articulates the desires and possibilities that each term—trans and feminist—wants from and offers to the other. In employing a “reading practice [that] requires being willing to lean into worldviews that might be hostile to [one’s] very life,” Awkward-Rich offers a field-spanning argument that has far-reaching implications for discussions of epistemic violence occurring both inside and outside of the academy.

Healy-Clancy’s “The Family Politics of the Federation of South African Women: A History of Public Motherhood in Women’s Antiracist Activism” represents a nuanced reevaluation of the historiography of race and gender and the meaning of motherhood in South Africa over the course of several historical shifts. The concept of “public motherhood” aims to undo the assumption that motherhood is or has been relegated to the private sphere, an assumption that, Healy-Clancy shows is deeply inappropriate in the South African context. Weaving together several strands that shaped conceptions of public motherhood and the formation and actions of the Federation of South African Women (FEDSAW)—ranging from the precolonial era in which state power emanated from the household, to the influence of Christianity, to the emergence of internationalist feminist discourses—Healy-Clancy significantly expands the historical and theoretical lens employed in discussions of public motherhood. In so doing, she models a scholarship sensitive to competing epistemologies, and she offers new insights into the relationship between motherhood and feminist movements and the raced and gendered history of colonialism and apartheid.

Cameron Awkward-Rich is a PhD candidate in the Program in Modern Thought and Literature at Stanford University. Also a poet, he is the author of Sympathetic Little Monster (Los Angeles: Ricochet Editions, 2016).

Meghan Healy-Clancy is assistant professor of history at Bridgewater State University and a nonresident fellow at the Du Bois Institute at Harvard University’s Hutchins Center for African and African American Research. Her research focuses on gender, race, and the politics of culture in southern African history, with a current emphasis on women’s antiapartheid activism across racial lines. She is the author of A World of Their Own: A History of South African Women’s Education (Charlottesville: University of Virginia Press, 2013). She is also the coeditor, with Jason Hickel, of Ekhaya: The Politics of Home in KwaZulu-Natal (Pietermaritzburg: University of KwaZulu-Natal Press, 2014). Her work has appeared in journals including the African Studies Review, South African Historical Journal, Journal of Southern African Studies, and Transition.