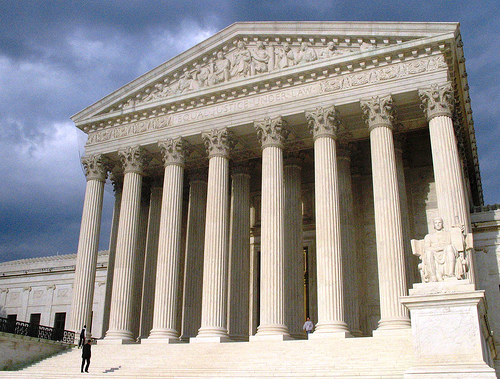 The US Supreme Court is set to hand down a series of key decisions on gene patenting, same-sex marriage, and the Voting Rights Act—all subjects that have been explored in detail in recent issues of Signs.

In Association for Molecular Pathology v. United States Patent and Trademark Office, the court will decide whether human genes can be patented. Myriad Genetics, Inc., currently holds a patent on the isolated forms of the BRCA1 and BRCA2 genes and maintains a monopoly on the tests to detect mutations in these genes, which are linked to increased risk of breast and ovarian cancer. The case thus addresses a host of issues relevant to feminist scholarship, from the commodification of knowledge to the genetecization of risk. Biologist Ruth Hubbard’s 2003 Signs article, “Science, Power, Gender: How DNA Became the Book of Life,” provides a useful historical overview of the rise of the gene within biology, documenting how the gene came to be figured as an “autonomous, all-powerful” figure. Hubbard also highlights the crucial contributions of two women—Barbara McClintock and Rosalind Franklin—to the history of genetics.

Several articles in the 2009 thematic issue “Reproductive and Genetic Technologies,” guest-edited by Kristin Bumiller, Molly Shanley, and Anna Marie Smith, critically address the trend toward geneticization in health care and the resulting potential for genetic reductionism in the treatment of a variety of socially situated health care problems. Dorothy Roberts, for instance, provides a comprehensive critique of “the … role of genetic screening [in making] individual citizens responsible for ensuring good health,” noting that free-market-based solutions often perpetuate racial and gender inequalities in health care.

Finally, the global politics of the patenting and commodification of scientific knowledge—including genetic knowledge—are addressed from a range of vantage points in the comparative perspectives symposium on bioprospecting, published in the Winter 2007 issue of Signs. The symposium highlights the ways in which commercial interests have attempted to patent, privatize, and commodify biological material and knowledge, and the longstanding feminist resistance to this seizure on the part of the indigenous groups whose knowledge is expropriated. As Vandana Shiva writes, this commodification “leads to the enclosure of the biological and intellectual commons.” The concerns of this symposium, then, might be used to place the patenting of BRCA1 and BRCA2 within a longer and geographically broader trajectory.

In Hollingsworth v. Perry and United States v. Windsor, which concern California’s Proposition 8 and the Defense of Marriage Act, respectively, the court’s upcoming decision could potentially have dramatic effects on the fight for same-sex marriage. Two recent Signs articles situate same-sex marriage debates and politics within national and transnational frames and call for a consideration of how neoliberalism shapes the terms of this debate. Lois Harder’s “The State and the Friendships of the Nation: The Case of Nonconjugal Relationships in the United States and Canada” analyzes how “socially conservative politics have inspired policies to increase relationship diversity in both countries.” And while policies recognizing nonconjugal relationships have certainly been informed by neoliberal logics, Harder argues that these these relations might still function to denaturalize the heteronormative family. In “Producing Homonormativity in Neoliberal South Africa,” Natalie Oswin focuses on the National Coalition for Gay and Lesbian Equality (later the Equality Project). Attentive to the fractures within the Coalition and Equality Project, Oswin examines how these groups negotiated South Africa’s politics of recognition and redistribution, arguing that their context-specific strategies—including those that led to the Equality Project’s success in its legal battle for same-sex marriage—should inform feminist and queer scholarship on homonormativity. Together these articles will provide useful points of comparison for thinking through how the legal and legislative arguments for and against same-sex marriage are shaped by national context, transnational rights discourses, and neoliberal thought.

Finally, as the Supreme Court prepares to reconsider the 1965 Voting Rights Act in Shelby County v. Holder, Stephen Houston Marshall’s forthcoming “‘Telling It Just Like It Is’: The Tragicomedy of the 1965 Voting Rights Act” presents an incisive retrospective. Marshall considers the act neither as essential legislation nor as federal overreach but rather as a tragicomedy that “affords insight into the paradox of unprecedented black electoral success at all levels of government at the same time that voter suppression programs aimed at African American and other minority voters have been proliferating.” The act is being considered in an era, Marshall notes, “that celebrates the memorialization of Martin Luther King alongside Thomas Jefferson and Abraham Lincoln on the National Mall at the same time that US racial inequality increases as the state dismantles policies designed to redress these inequalities. It is an era that honors Rosa Parks, Fannie Lou Hamer, and Coretta Scott King, in the words of President George W. Bush, as ‘three heroes of American history who devoted their lives to the struggle for human rights,’ while black women continue to epitomize illegitimacy in the national imagination.” To read Marshall’s analysis in full, look out for the Spring 2014 issue, which will be available on JSTOR, or subscribe to the journal.