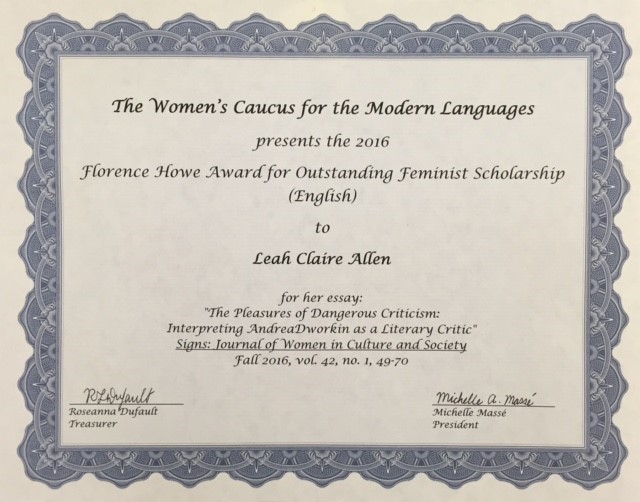 Signs and the University of Chicago Press are pleased to announce that Leah Claire Allen’s article “The Pleasure of Dangerous Criticism: Interpreting Andrea Dworkin as a Literary Critic” has been awarded the 2017 Florence Howe Award for the field of English, presented by the Women’s Caucus of the Modern Language Association. The article was published in the Signs special issue “Pleasure and Danger: Sexual Freedom and Feminism in the Twenty-First Century.”

Carefully rereading the work of one of the central figures of feminism’s so-called sex wars, Andrea Dworkin, Allen’s essay effectively recenters the role of the literary, and debates about literary representation, in shaping the topography of the sex wars. Far from rehashing the pro- and anti-sex positions of feminists that emerged, Allen’s return to Dworkin as a literary critic illuminates how the debates themselves were framed by differing understandings of the relationship between the realms of literature and life. By placing Dworkin in conversation with figures who were key to the establishment of feminist literary criticism—including Kate Millet, Susan Gubar, and Susan Sontag—Allen shows that the terms of the sex-wars debates were tied to then-developing literary-critical stances about whether literature (and by extension fantasy) was separable from the “real world” or instead an integral part of life as lived. Allen’s reevaluation of Dworkin’s literary-critical work also draws out her early forays into what would become known as intersectionality and queer theory, thus expanding our view of the theoretical and political subjects addressed through literature during the sex wars.

Leah Claire Allen is a visiting assistant professor of gender, women’s, and sexuality studies at Grinnell College She is at work on a book titled “In Praise of Bad Critics” that revisits feminists from the 1960s and 1970s who have been considered “bad feminists” or “bad critics” either in the history of feminism or in literary and cultural criticism more broadly. She completed her PhD in literature and a graduate certificate in feminist studies at Duke University in 2014. She also holds an MA in gender, sexuality, and women’s studies from Simon Fraser University.