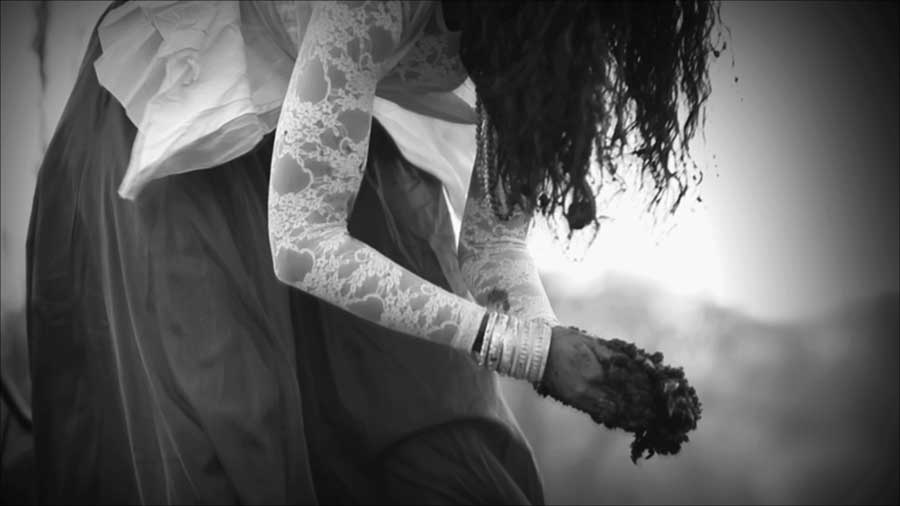 Wangechi Mutu, Eat Cake, 2012. Still from video installation. Courtesy of the artist, Susanne Vielmetter Los Angeles Projects, Gladstone Gallery, and Victoria Miro Gallery. © 2012 by Wangechi Mutu. Permission to reprint may be obtained only from the artist. Mutu’s work is featured on the cover of the Winter 2017 issue of Signs.

Artist Statement
In the video “Eat Cake,” a dance is enacted by another female character, whose place of origin is hard to determine from her dress code and general appearance. She materializes magically in a seat placed centrally in the video, in front of a large, dark cake that she proceeds to squat or genuflect in front of. As she starts to handle the mound, it’s obvious that her manner of eating is gluttonous and carnal. There’s a predatory, mysterious and unknowable quality to her once she has a taste of this very earthy, fecal-like meal.

[This text originally appeared Wangechi Mutu’s “The Power of Earth in My Work,” in Earth Matters: Land as Material and Metaphor in the Arts of Africa, ed. Karen Milbourne (New York: Monacelli Press, 201): 90–95.]

Artist Biography
Wangechi Mutu was born and raised in Kenya and has made art in New York for almost twenty years. Her work in multi-mediums has peeled into the deep layers that define gender and racial identity. At the center of her work she often places a performing or posed figure and uses this as a means of focal point and to unlock the dialogue about perception in both personal and political realms. Mutu is the recipient of the United States Artist Grant (2014) and the Brooklyn Museum’s Asher B. Durand Artist of the Year Award (2013), and she was honored as Deutsche Bank’s first Artist of the Year (2010). She has had solo exhibitions at the Museum of Contemporary Art Australia; Deutsche Guggenheim, Berlin; the Brooklyn Museum of Art; Montreal Museum of Contemporary Art; San Francisco Museum of Modern Art; Staatlichen Kunsthalle Baden-Baden, Germany; Wiels Contemporary Art Center, Brussels; the Nasher Museum of Art at Duke University, North Carolina; the Block Museum of Art at Northwestern University, Illinois; and Miami Art Museum.