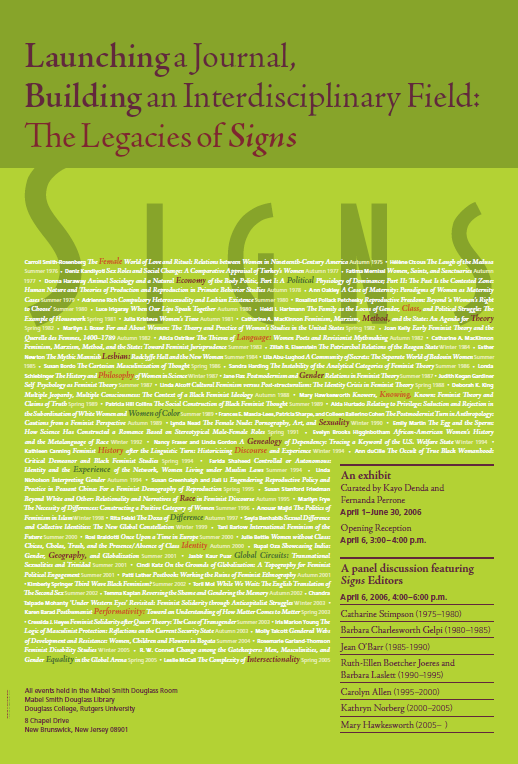 In 2006, seven Signs editors appeared on a panel commemorating the thirtieth anniversary of the journal and opening the exhibit Launching a Journal, Building an Interdisciplinary Field: The Legacies of Signs at Rutgers University. Catharine Stimpson, Barbara Gelpi, Barbara Laslett and Ruth-Ellen Boetcher Joeres, Carolyn Allen, Kathryn Norberg, and Mary Hawkesworth all spoke about Signs' history, their experiences editing the journal, and the roles they played in shaping the content of the journal. Video of this event is now available through the Community Repository project of the Rutgers Libraries. The video represents a rare opportunity to hear seven esteemed feminist scholars reflect on everything from the nitty-gritty of feminist publishing (including whether footnotes are indeed a bastion of masculinist hegemony), the politics of funding, the impact of feminist scholarship on the academy, and their own efforts to reconfigure the production of feminist knowledge.

Special thanks go to Kayo Denda, Rutgers' women's studies librarian, and Fernanda Perrone, who oversees the Signs archives, for initiating and curating the Launching a Journal exhibit and for arranging for the video of the event to be archived. Thanks also to Jacqueline Thaw for designing the poster for the event.

The order of the speakers is as follows: