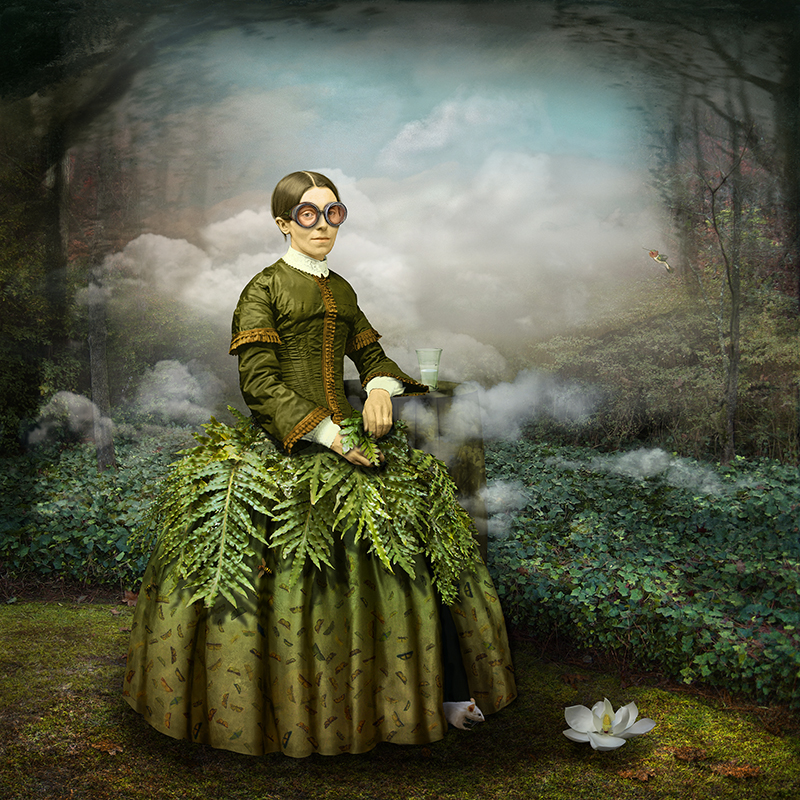 Maggie Taylor, Reluctant Optimist, 2013. Archival pigment print, 22 x 22 in. © 2013 by Maggie Taylor. Permission to reprint may be obtained only from the artist. This image appeared on the Autumn 2020 issue of Signs.

Artist Statement
Since 1997 I have been using a flatbed scanner, a computer and small digital cameras as my primary tools for capturing fragments of reality. I weave these slices of time together digitally to create dreamlike worlds inhabited by everyday objects and slightly out-of-the-ordinary people. I rarely photograph contemporary people-I prefer collecting and recycling 19th-century photographs.

When I begin to work on an image, I do not have a preconceived idea of the finished work. The images develop slowly, revealing themselves to me over weeks or even months sitting at my desk.  This work is meant to be an open-ended, poetic narrative, a mystery to be unraveled by each individual viewer.

Artist Biography
Maggie Taylor is an artist who lives at the edge of a small swamp on the outskirts of Gainesville, Florida. She was born in Cleveland, Ohio, in 1961, and moved to Florida at the age of 11. Her childhood was spent watching countless hours of situation comedies and science fiction on television; later she received a philosophy degree from Yale University. A little later she got a master’s degree in photography from the University of Florida. Her digital composites have been widely exhibited and have been collected by many museums the US and other countries. Her work is featured in the following books: Adobe Photoshop Master Class: Maggie Taylor’s Landscape of Dreams (Berkeley, CA: Peachpit Press, 2005); Solutions Beginning with A (Palo Alto, CA: Modernbook Editions, 2007); Alice’s Adventures in Wonderland by Lewis Carroll (Palo Alto, CA: Modernbook Editions, 2008); No Ordinary Days (Gainesville: University Press of Florida, 2013); and Through the Looking-Glass, And What Alice Found There (Gainesville: Moth House Press, 2018).