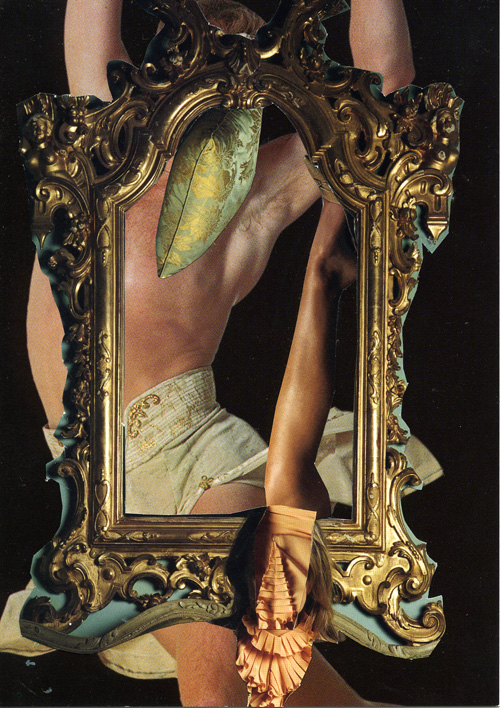 Lisa A. Turngren’s 2-Way Mirror was featured on the Summer 2012 issue of Signs, “Sex: A Thematic Issue.”

Artist Statement
As a medium, collage has always allowed me to speak about concepts and content that lie on the surface (manifest) and below (latent).  It is a form that lends itself to tricking the eye and perverting the figure-ground relationship, exposing the natural fluidity of perception.

The title, 2-Way Mirror, suggests these ideas of perception, via self-reflection and through the gaze of the other.  The frame, though seemingly solid and binding, is intercepted by a paper frill indicating a juncture where male and female bodies intersect.  This altered body-in-motion that extends outside of its gilded casing suggests a sort of flight and freedom from the constraints of the framework constructed in gender. © 2004 by Lisa A Turngren. Permission to reprint may be obtained only from the artist.

Biographical Statement
Lisa A Turngren is a New York City–based mixed-media artist who holds a BFA in painting from the Tyler School of Art.  Her work is informed by her graduate studies in clinical social work, psychoanalysis, and art therapy and is process oriented and relies on stream of consciousness and chance.  This experimentation allows her to explore both consciously and unconsciously personal and social issues that relate to gender, femininity, and social norms.  Her current collage series emphasizes the experiences of women across generations through the passing down of objects (linens, silver, household items), investigating what these objects symbolize personally and culturally while examining the social norms and constructs, ideals and traditions, bequeathed overtly and implicitly.