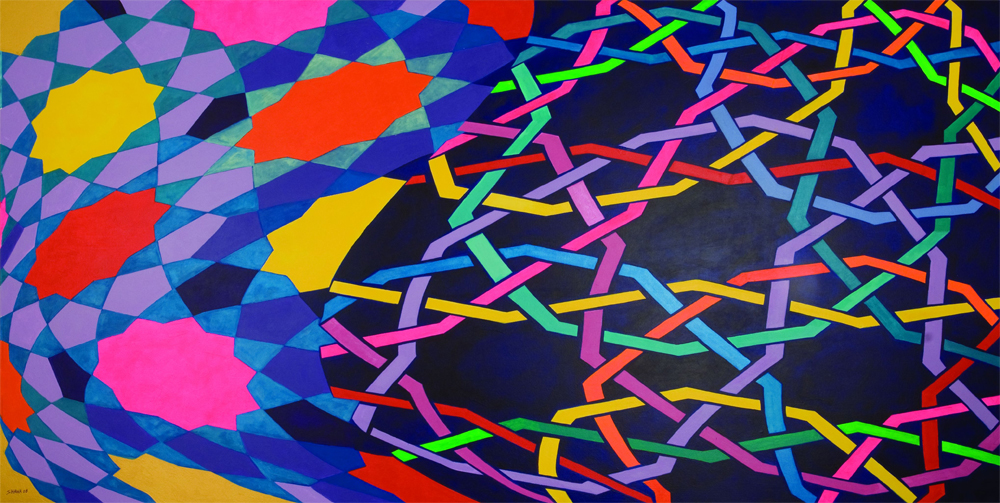 Artist Statement:
Growing up in the Middle East, where many diverse cultures live in close proximity, I learned to speak several different languages. Speaking different languages helps one understand how complex problems give rise to multiple explanations that are often mutually exclusive. From the privileged vantage point of the artist, I try to consider all sides of any question. Through my multi-layered approach, I express the dichotomies, ironies, and hypocrisies to which others seem less attuned.

Today, when we are desensitized by the surfeit of media violence, new strategies are needed to overcome people’s apathy and weariness for compassion. In the painting cycle Sarab (meaning “mirage”), I view Dubai, a modern city rising from the desert, as a place devoid of cultural identity, which I represent through the geometry of Islamic design. Once altered, the immutable laws of Islamic geometry lose their validity, resulting in chaos. The paintings ask what is left of Arab culture when the pattern of the culture itself goes awry. This series is about self-deception, about creating a superficial sense of order that, in pretending to be real, instead reveals its own emptiness and lack of core values.

In The Other Side of Paradise, I explore the motivations behind the shahida—the Arabic term for “female suicide bomber”—a question that few people would likely choose to consider. The core of the shahida model revolves around a troubling confusion of eroticization and weaponization. In this installation, I sought to assign to each aspirant an identity and wholeness that would otherwise be denied her in the routinely horrific media reports of female suicide bombers in Gaza.

Biography:
Laila Shawa (born 1940, Gaza), a descendant of one of the oldest Palestinian landowning families, lives and works in London and Vermont. She received her first formal training at the Leonardo da Vinci Art Institute in Cairo in 1957–58. In 1958–64, she studied at the Academy of Fine Arts in Rome, spending summers with the artist Oskar Kokoschka at his School of Seeing in Salzburg. After concluding her studies, Shawa returned to Gaza to supervise arts and crafts education in refugee camps for the United Nations Relief and Works Agency, and entered into an informal apprenticeship with the UN war photographer Hrant Nakasian. In 1967, she moved to Beirut, where she stayed for nine years as a full-time painter. With the outbreak of the Lebanese Civil War, she returned to Gaza, where, for the next decade, she collaborated on the design and construction of the Rashad Shawa Cultural Centre.

When Shawa took up residence in London in 1987, she launched the painting series Women and the Veil, a sociopolitical critique of its subject. In her next series, Women and Magic, she explored the practice of magic and witchcraft in Islamic societies, embodied by The Hands of Fatima. In 1992, she began her silkscreen cycle The Walls of Gaza, which called attention to the emergence of generations of traumatized Palestinian children.

Shawa’s utilization of photography in her paintings, sculptures, and installations has been very influential on contemporary Palestinian art through such works as the artist’s installation Crucifixion 2000: In the Name of God and her sculpture Clash, conveying her immediate reactions to 9/11. With her 2008 series Sarab, she returned to painting, executing a cycle of twenty-nine works that assert the role of Islamic geometric patterning as a primary visual identifier of Islamic popular culture. In January 2009, she embarked on two new series, Gaza III and a cycle of works entitled Cast Lead. The latter focuses on the children killed during Cast Lead—the Israeli name for its three-week-long airstrike operations in Gaza. The Other Side of Paradise, from 2011–12, explores the subject of Palestinian female suicide bombers.

Her work is represented in public and private collections throughout the world, including the Ashmolean Museum, Oxford; British Museum, London; National Museum for Women in the Arts, Washington, D.C.; and the National Galleries of Jordan and Malaysia.