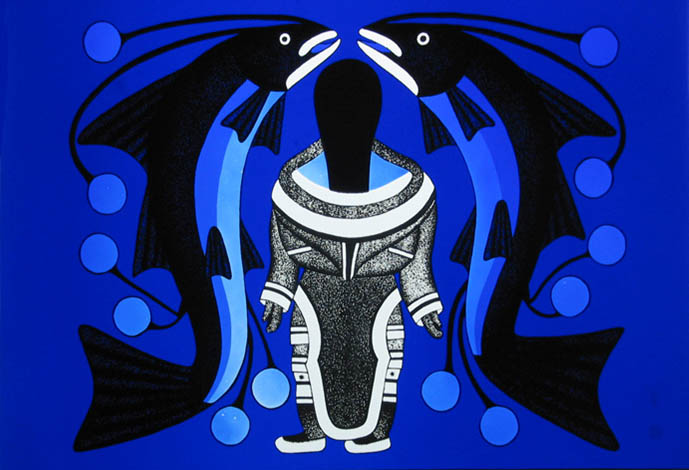 Kenojuack Ashevak’s Woman with Fish appeared on the Spring 2009 issue of Signs (volume 34, number 3), which featured a comparative perspectives symposium on gender and polar studies.

Artist Statement
This piece was produced through a process that began with selecting and cutting stained glass to the proper dimensions and then applying the image through screen printing, firing, etching, and sandblasting.  Available through Albers Gallery of Inuit Art. © 2006 Dorset Fine Arts. Permission to reprint may be obtained only through Dorset Fine Arts.

Biographical Statement
Kenojuak Ashevak is one of Canada’s most acclaimed graphic artists. Born on south Baffin Island, Ashevak grew up traveling from camp to camp on south Baffin and in Arctic Quebec. Ashevak has created many carvings from soapstone and thousands of drawings, etchings, stone-cuts, and prints — all much sought after by museums and collectors. She has received many honors, including honorary degrees from Queen’s University and the University of Toronto, the prestigious Lifetime Achievement Award at the National Aboriginal Achievement Awards Ceremony in Vancouver, and the Governor General’s Award for excellence in the visual arts. Her work has appeared on Canadian postage stamps, as murals, and in exhibitions around the world.