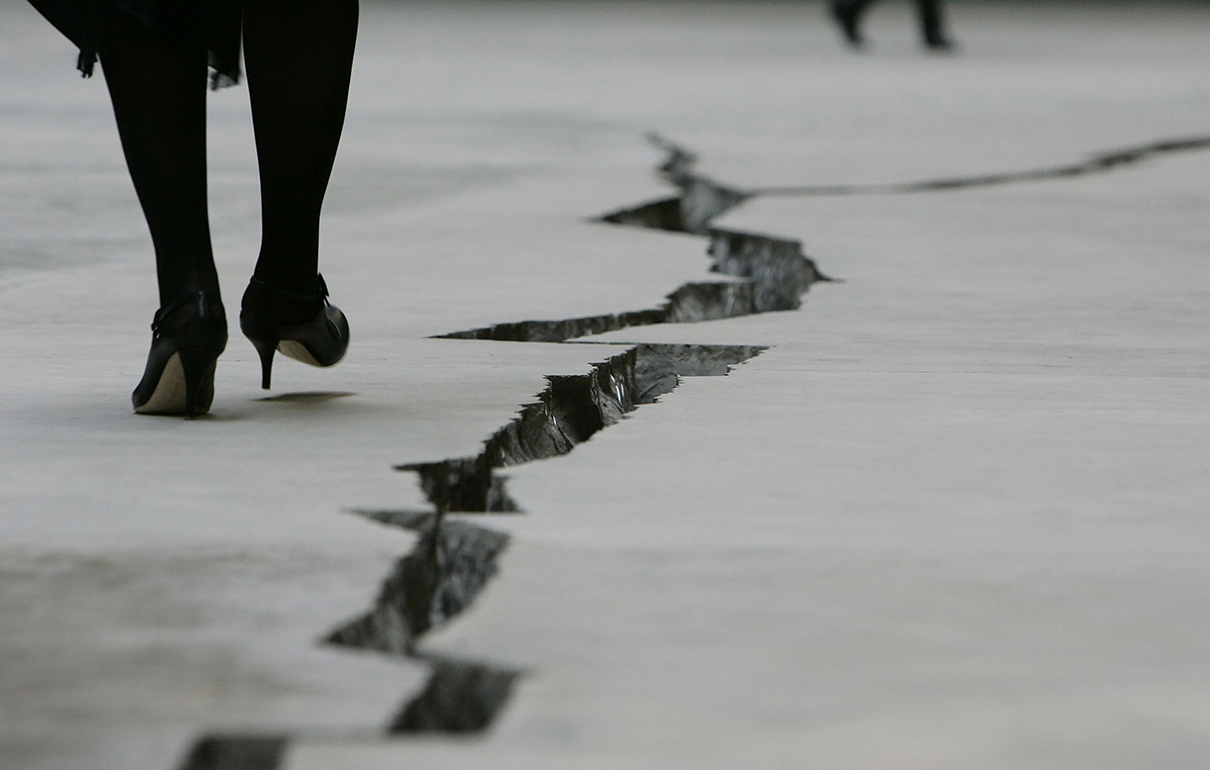 Doris Salcedo, Shibboleth (2007). Installation, Tate Modern gallery, London. © 2007 by Doris Salcedo. Permission to reprint may be obtained only from the artist. This work appears on the Spring 2019 issue of Signs.

Artist Statement
Shibboleth is a subterranean chasm that stretches the length of the Tate Modern’s Turbine Hall. The concrete walls of the crevice are ruptured by a steel mesh fence, creating a tension between these elements that resist yet depend on one another. By making the floor the principal focus of the project, Salcedo dramatically shifts our perception of the Turbine Hall’s architecture, subtly subverting its claims to monumentality and grandeur. Shibboleth asks questions about the interaction of sculpture and space, about architecture and the values it enshrines, and about the shaky ideological foundations on which Western notions of modernity are built.

The word “shibboleth” refers back to an incident in the Bible, which describes how the Ephraimites, attempting to flee across the river Jordan, were stopped by their enemies, the Gileadites. As their dialect did not include a “sh” sound, those who could not say the word “shibboleth” were captured and executed. A shibboleth is therefore a token of power: the power to judge, reject and kill. What might it mean to refer to such violence in a museum of modern art?

For Salcedo, the crack represents a history of racism, running parallel to the history of modernity; a standoff between rich and poor, northern and southern hemispheres. She invites us to look down into it, and to confront discomforting truths about our world.

Artist Biography
Doris Salcedo (born 1958) is a Colombian-born visual artist and sculptor. Her work is influenced by her experiences of life in Colombia and is generally composed of commonplace items such as wooden furniture, clothing, concrete, grass, and rose petals. Salcedo’s work gives form to pain, trauma, and loss, while creating space for individual and collective mourning. These themes stem from her own personal history. Members of her own family were among the many people who have disappeared in politically troubled Colombia. Much of her work deals with the fact that, while the death of a loved one can be mourned, their disappearance leaves an unbearable emptiness. Salcedo currently lives and works in Bogotá, Colombia.