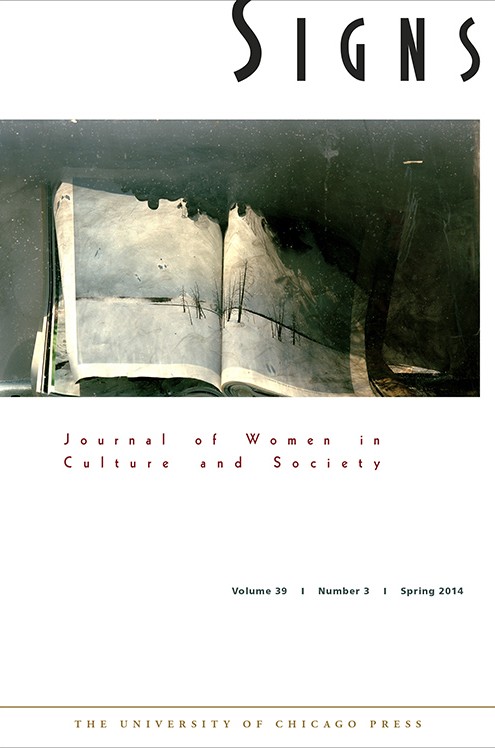 The cover of the Spring 2014 issue of Signs features Kim Anno’s photograph, National Geographic in fish tank, with ink and debris (2010)

This issue (available on JSTOR) begins with a comparative perspectives symposium on the theme of “Translation, Feminist Scholarship, and the Hegemony of English.” Claudia de Lima Costa and Sonia Alvarez open the symposium by signaling the importance of translation, conceived both linguistically and ontologically, to contemporary decolonial feminisms, and they examine the role of academic journals and citationality in determining which theories travel. Francine Descarries, too, takes up the issue of scholarly journals’ role in reproducing the hegemony of English within neoliberal globalization through the concentration of resources and the imposition of English as the language of scientific knowledge production. She also notes the distortions in knowledge that result from the marginalization and selective translation of French-language scholarship.

In “Translations That Matter,” Lola Sánchez uses a particular case—a single passage in the Spanish translation of Joan W. Scott’s “Gender: A Useful Category of Historical Analysis”—to examine how translations are shaped by the context of their production and how that context affects the transmission of theoretical discourse. Ingrid Palmary turns attention to the importance of translation within the research process and the problems that can be created when translation is viewed either as a problem to be minimized or as necessarily a “loss” when compared to the original. By giving examples of how translational dynamics can reproduce colonial power relationships within the research process, she demonstrates that translation concerns “not only cultural meaning but also research politics.” J. Devika’s “Getting beyond the Governmental Fix in Kerala” displaces the question of the hegemony of English by examining the intralanguage dynamics of translation in Malayalam—how the language of governmental feminism, intellectual-high Malayalam, limits the potentials unleashed by the “grounded translations” found in everyday Malayalam.

Min Dongchao continues the interrogation of how and why some theories travel, particularly the circulation of feminist theories between the West and China. Examining the many actors involved in processes of translation—including Chinese women’s studies scholars and the All-China Women’s Federation—Min traces the funding sources and the competing interests and political orientations that influence how ideas circulate. Finally, Luise von Flotow and Carolyn Shread propose a retheorization of feminist translation through the concept of metramorphosis, expanding on Bracha L. Ettinger’s work on matrixial subjectivity.

Five of the symposium’s essays are available online in international languages, including Chinese, French, Malayalam, and Spanish. Special thanks go to the authors of these essays for the effort they put into providing these versions; to Edward Quiceno, Signs’s fall 2013 art intern, for the design work he performed; and to Sarah Gardiner, at the University of Chicago Press, for her efforts in posting these essays online. Finally, the editors at Signs would like to thank Amari Verástegui for her invaluable work in conceptualizing this Comparative Perspectives Symposium and in recruiting contributors.

Rosi Braidotti’s article continues the theme of translation in her tribute to Françoise Collin, the Belgian-born feminist philosopher, writer, and founder of the landmark feminist journal Les cahiers du Grif. Braidotti discusses Collin’s role as a mentor to her and other graduate students in Paris and beyond, the role of Les cahiers du Grif in collecting and promoting diverse strains of Francophone feminist thought, the Anglophone construction of French feminism, and Collin’s own writings. Braidotti’s article pays tribute to a complex thinker and to the complexities of inter- and intralinguistic difference.

Maria do Mar Pereira’s “The Importance of Being ‘Modern’ and Foreign: Feminist Scholarship and the Epistemic Status of Nations” argues that while the constraining effects of the hegemony of knowledge production in particular Western countries have been subject to a great deal of critique within feminist scholarship, the opportunities and openings that such hegemony offers for women’s studies scholars and programs in (semi)peripheral countries are understudied. By examining the “local status of global academic hegemonies” through her ethnographic work in Portuguese women’s studies programs and conferences, Pereira demonstrates that invocations of the “modern foreign” provide a persuasive rhetorical strategy for justifying women’s, gender, and feminist studies and thus complicates accounts of the gains and losses in the power asymmetries that characterize the circulation of feminist knowledge.

In “In the Name of the Mother,” Carolyn J. Eichner examines nineteenth-century French feminists’ resistance to patronymic naming patterns. Considering the differing goals and strategies of three schools of socialist feminism—utopian, revolutionary, and republican—Eichner reveals how struggles over the name and efforts to establish matrilineality contested deeply engrained notions regarding identity, autonomy, family, and history.

Returning to a contemporary context, Mayanthi Fernando discusses the dynamics of French secularism through an analysis of several prominent legal cases and public debates in which Muslim women are compelled to discuss intimate details of their lives. By examining how the “secularization of Islam” in France demands the surveillance of Muslim women’s intimate sexual and religious lives while at the same time insisting that these are private matters, Fernando provides a compelling account of the “cunning of secular power.”

A pair of articles turn to analyses of US black politics. In his article, Stephen Houston Marshall uses “tragicomedy” as a framework to discuss the legacy of the 1965 Voting Rights Act and the politics of its 2006 reauthorization. While the 2006 reauthorization act was named for Fannie Lou Hamer, Rosa Parks, and Coretta Scott King, Marshall takes a closer look at the political aims of these three pioneering activists and finds a tragicomic irony in such naming: the marginalization of black women, as well as general racial disenfranchisement, “remains an enabling condition of liberal democracy in the United States.” In “Intimate Injustice, Political Obligation, and the Dark Ghetto,” Shatema Threadcraft intervenes into contemporary debates in political theory regarding the civic obligations of black residents of urban centers. Departing from Tommie Shelby’s claim that residents of the “dark ghetto” do not have an obligation to conform to social and economic norms because of the extreme racial injustice they face, Threadcraft analyzes the civic obligations of black women in particular, taking account of their historical roles within black urban communities, their interactions with racist institutions, and the restrictions imposed on their freedom of movement. Arguing that accounts of political obligation are incomplete if they do not attend to gender, Threadcraft proposes a theory of intimate justice to account for the specificity of black women’s needs.

A final pair of articles provide very different analyses of the International Association of Athletics Federations’ decision to subject South African runner Caster Semenya to gender verification testing. Zine Magubane begins from a critical analysis of postcolonial, poststructural, and intersectional scholarly analyses of the controversy over Semenya’s case, finding that scholars overlooked the opportunity to investigate the crucial role of race and nation in the constitution of “intersex.” Undertaking such an investigation herself, Magubane provides a comparative history of intersex in the United States and South Africa, finding that in South Africa, the prototypical intersex case was black, while in the United States, the prototypical case was white. Rather than treating this as a matter of simple demographics, Magubane traces the racial histories, conceptions of citizenship, and medical models that produced such raced national inflections. In a different vein, Kathryn Henne asks what is politically at stake in the quest to verify gender by concentrating on the history verification testing in sport. Henne examines the International Olympic Committee Medical Commission’s changing regulations on gender verification and finds that in fact efforts to “preserv[e] a steadfast binary ha[ve] only provided evidence to the contrary.” Despite this, Henne argues, gender verification testing still reflects a “technocratic desire for a formation of sex that reflects binary constructions of gender.”