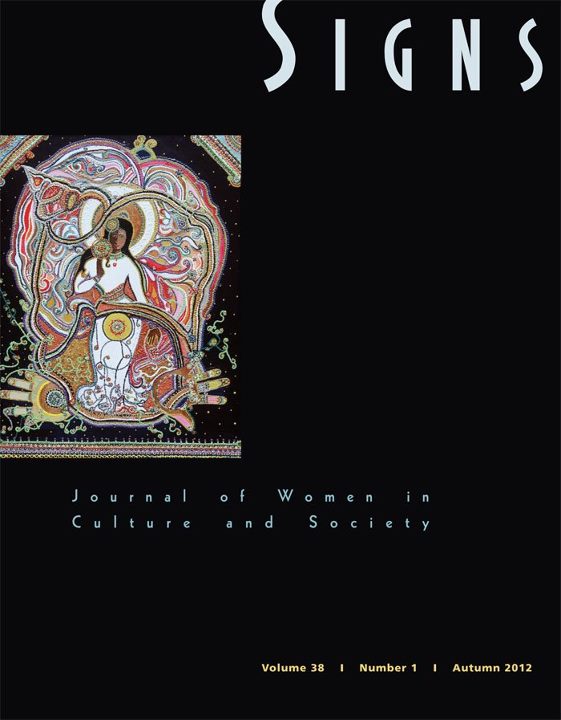 Signs’s Autumn 2012 issue begins with a symposium on Romani Feminisms, edited by Ethel C. Brooks. Bringing together scholars and activists, the symposium examines the complex ways that Romani women and feminists are positioned in relation to states, communities, and nongovernmental organizations, as well as their multivalent responses to such positionings. In response to the “increasingly precarious situation for Roma worldwide,” Brooks writes in her introduction, the symposium is a “way of marking our existence as Romnia and feminists; it is a witness to our presence, proof of our existence, and a claiming of our always-precarious place in the world” (1).

Articles in the issue explore feminist field formations: from the erasure of class and surprising convergences in the theorization of sex work; to third-wave feminism’s reproduction of whiteness; to dissertations produced in women’s studies; to a comparison of feminist, race movement, and autonomous women-of-color publications; to an overview of indigenous and lesbian feminisms in Latin America. The final two articles deal with the institutionalization of children’s rights in Peru and the Crisis Pregnancy Center in the United States, thus providing vastly different takes on the institutional dynamics of activist movements.

Either Sing or Go Get the Beer: Contradictions of (Romani) Female Power in Central Europe
Petra Gelbart

In the Name of the Mother: Renegotiating Conservative Women’s Authority in the Crisis Pregnancy Center Movement
Kimberly Kelly