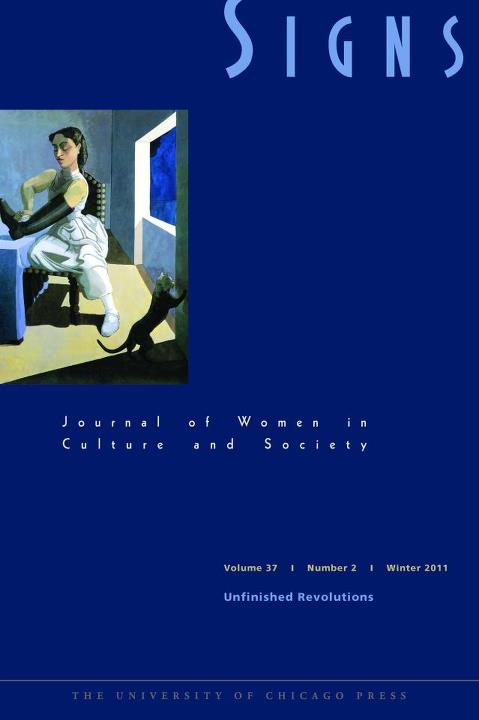 The cover of the Winter 2012 issue, a special issue on “Unfinished Revolutions,” edited by Phillip Rothwell

Ashley Currier’s Signs article “The Aftermath of Decolonization: Gender and Sexual Dissidence in Postindependence Namibia” has been awarded the 2013 Sex and Gender Distinguished Article Award from the Sex and Gender section of the American Sociological Association.

Currier’s article, which was published in the Winter 2012 issue of Signs, explores the sociological effects of “political homophobia”—the tactics of political leaders who use homophobic threats not only to keep nonconforming sexualities in line but also to construct homosexuality as a colonial imposition altogether foreign to the postcolonial nation. Currier details how a strategic alliance between feminist and LGBTQ activists emerged to combat the political homophobia of the leaders of the South West African People’s Organization (SWAPO), the liberation movement that had become Namibia’s ruling party. Framing gender and sexual dissidence as a decolonization movement, Currier shows how two organizations, Sister Namibia and the Rainbow Project, challenged SWAPO’s marginalizing vision of national liberation by reinserting gays and lesbians into the national imaginary and pressuring the government to embrace the commitment to equality that fueled the antiapartheid struggle.

As the award committee stated, Currier’s article provides “a very insightful analysis of a pressing social issue in sub-Saharan Africa…. Currier’s analysis of alliances between LGBTQ and feminist activists [has] important implications for similar struggles across the African continent and indeed within the U.S.”

The award will be presented at the Sex and Gender section’s meeting at the American Sociological Association on August 12.

Ashley Currier received her PhD in sociology from the University of Pittsburgh. She is currently assistant professor in the Department of Women’s, Gender, and Sexuality Studies at the University of Cincinnati.