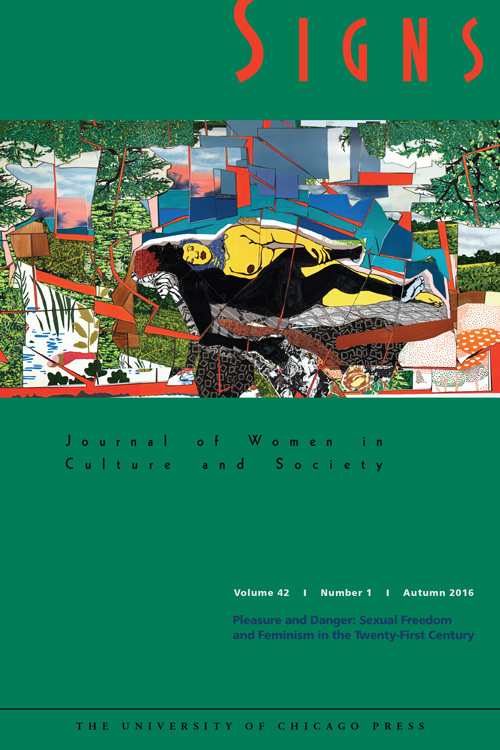 Signs is pleased to announce the publication of a new special issue, “Pleasure and Danger: Sexual Freedom and Feminism in the Twenty-First Century”!

We are especially pleased that we are able to offer open access to all of the articles in the issue on a rotating basis: Signs editor Suzanna Danuta Walters’s introduction to the issue and Alice Echols’s retrospective essay on the 1982 Barnard Conference will remain freely available for the next three months, and all other articles in the issue will be made freely available for shorter periods.

The issue examines how the so-called sex wars have shaped contemporary discussions around sexual pleasures and dangers. The articles in the issue demonstrate that feminist scholars are pushing far beyond tiresome splits and divisions. Articles remember, reassess, and complicate key moments and figures of the “sex wars,” but they also demonstrate the vitality and dynamism of contemporary feminist approaches to the study of sexuality. Representing a wide range of disciplinary and interdisciplinary locations, articles in the issue address the Barnard Conference itself, literary and artistic representation, national and transnational sexual economies, and sexual violence and the law.

Introduction: The Dangers of a Metaphor—Beyond the Battlefield in the Sex Wars
Suzanna Danuta Walters

Retrospective: Tangled Up in Pleasure and Danger
Alice Echols

“I Get Paid to Have Orgasms”: Adult Webcam Models’ Negotiation of Pleasure and Danger
Angela Jones