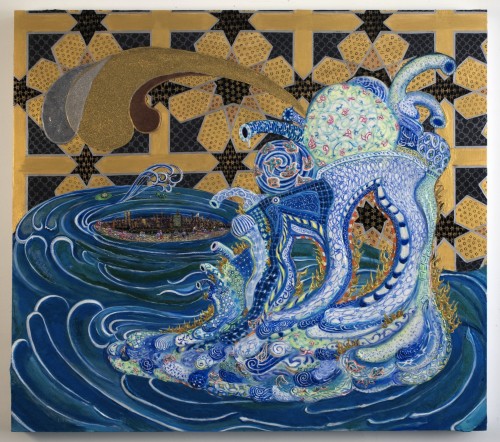 The Source (2009).
Acrylic and glitter on gessoed panel, 48 × 54 in.
Photo by Adam Reich.
© Negar Ahkami. Courtesy of Jasanna and John Britton and the artist.

Artist Statement:
My paintings draw inspiration from Iran’s patterned-art traditions and elaborate blue-tiled mosques. I apply multiple layers of congealed gesso and acrylic mediums, and alternate the use of glossy and matte finishes, pearlescent gold, and glitter. The results are visually dynamic surfaces that evoke Iran’s traditions of lusterware ceramics and bas-relief tile work.

There is a richness and complexity in my paintings that reflect my reverence for Persian art. At the same time, my work upends the perfection we expect from Persian-Islamic art. Taking permission from Western expressionism, feminism, and popular culture, I embrace a personally expressive voice and a raw sense of touch. In lieu of poetry and transcendence, my approach to Persian art reflects the neuroses of our time, as well as those of the artist.

My images of mosques double as melting, radioactive power plants. The cartoonish meltdowns satirize the brutal Iranian regime at the same time that they satirize Islamophobic anxieties about a nuclear Iran. In rendering these melting cityscapes as both exquisite and cartoonishly menacing, I have created an aesthetic out of the painfully opposing views of Iran to which I’ve been exposed.

I embrace the fantastical sensibility of orientalist art to create psychological spaces that grapple with my own nostalgia and sense of loss for Iran. Yet, in many works, I subvert the exoticism of orientalism by emphasizing humanity and interconnectedness. My reference to Iranian consumerist fetishes for the West, as in Suffocating Loveseat Sectional, challenges the one-way gaze of orientalism, and suggests that exotic escapism occurs in both directions.

Biography:
Negar Ahkami (born 1971, Baltimore) was raised in northern New Jersey. She received a BA in Middle Eastern languages and cultures from Columbia University in 1992, a JD from Georgetown University in 1997, and an MFA from the School of Visual Arts in 2006.

Her work is included in the collections of the New Britain Museum of American Art, Connecticut; the DePaul University Art Museum, Chicago; the Farjam Collection in Dubai; and a corporate collection in the United States.

Ahkami has participated in various artist residency programs, among them the Jentel Artist Residency Program, Banner, Wyoming, 2003; the Skowhegan School of Painting and Sculpture, 2004; the Lower Manhattan Cultural Council Workspace Residency, 2006, 2007; and AIM 28, Artist in the Marketplace, Bronx, New York, 2007–08.