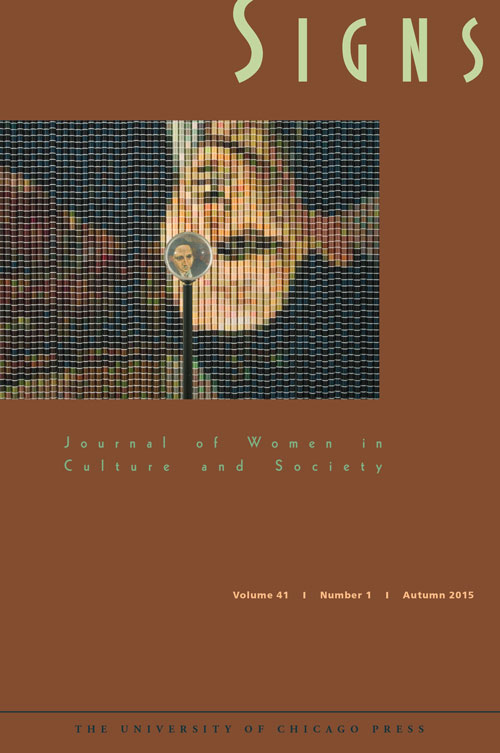 The cover of the Autumn 2015 issue of Signs features Devorah Sperber’s After Picasso (Gertrude Stein).

The Autumn 2015 issue of Signs is now available on JSTOR. In addition to a host of articles, the issue also contains a call for papers for the 2017 Catharine Stimpson Prize for Outstanding Feminist Scholarship.

The issue begins with Marie E. Berry’s analysis of Rwanda’s efforts to improve women’s status in the twenty years since the Rwandan genocide. While Rwanda has been viewed as a model for women’s empowerment, Berry’s interviews with 152 Rwandan women uncover a set of paradoxes regarding women’s rights, education, and labor. These paradoxes, Berry argues, demonstrate that “in aiming to improve people’s lives, the Government of Rwanda … restricts women’s bodies and labor in ways that further perpetuate their subjugation and entrench their poverty.”

In “Surrogate Dating and the Translation of Gendered Meanings across Borders: The Case of China’s E-mail-Order Brides,” Monica Liu examines a little-studied but crucial group of actors within online marriage markets: the commercial intermediaries that mediate cyber romances, especially the “translators” who facilitate correspondence between Chinese women and Western men. These mediators, Liu contends, play a crucial role in building potential brides’ cultural capital and crafting hyperfeminized personas that are central to this global market that is commoditizing intimacy.

Amina Jamal intervenes in contemporary debates about Muslim women’s agency, secularism, and piety, analyzing discourses surrounding honor-related violence. Jamal questions anti-imperialist feminism’s failure to disrupt “the intransigent association of freedom, particularly individual freedom, with secularism and communitarian restraint with Islam.” Jamal proposes a notion of “transgressive piety,” derived from the Sufi tradition of Islam, both to complicate the secular/religious divide and to provide discursive space for Muslim women “to be both individual subjects and members of family and community.”

Turning to an examination of the medicalization of domestic violence in a US context, Paige Sweet draws on interviews with medical advocates and health-care providers, finding that feminist advocacy is depoliticized when expertise about domestic violence falls under the auspices of biomedicine. Tracing the process of “scientiz[ing] feminist advocacy knowledge,” Sweet demonstrates that the transformation of domestic violence into a chronic condition involves both the “degendering of victim advocacy” and the “reification of gender difference through the language of risk.” Also exploring the politics of medicalization, Sabrina Strings’s “Obese Black Women as ‘Social Dead Weight’: Reinventing the ‘Diseased Black Woman” argues that medical concerns about black women’s health rely on and reinforce the “trope of the diseased black woman that has been used throughout American history.” Strings’s detailed and historically informed readings of medical and popular literature reveal that the notion of “black female sensualism,” which has long represented black women as a health danger, is now at work in discourses around reported rates of obesity among black women.

Kristina Gupta’s work on “compulsory sexuality” seeks to critically interrogate the “assumption that all people are sexual” and to “describe the social norms and practices that both marginalize various forms of nonsexuality and compel people to experience themselves as desiring subjects, take up social identities, and engage in sexual activity.” Gupta contextualizes the emergence of this concept within asexual communities, demonstrates how it complicates feminist and queer discourses about sexuality, and carefully outlines some of its limitations.

In “‘I’ll Give You a Dollar If You Give Me Your Papers’: Active Citizenship and Immigrant Women’s Right to Work,” Lucía Isabel Stavig attends to how citizenship functions within everyday life and interacts with gender, race, ethnicity, and class. Stavig analyzes interviews with undocumented women, who describe their “interactions with out-of-work males of color who are US citizens.” Stavig argues that—while these women may appear to draw on dominant discourses of liberal citizenship and hegemonic racial paradigms—they in fact are expressing “collectively and spatially informed notions of citizenship that originate in their home countries and migrate with them.” This notion of “active citizenship,” she argues, demonstrates the need to move beyond notions of “racial naturalization” and to attend to the complexities of citizenship within intersectional analyses.

Jennie Lightweis-Goff critically examines the “elision of urban slaves” within the dominant imaginary of US slavery, despite the fact that almost one-fifth of American slaves were captive in cities. Viewing this elision as “a gendered phenomenon,” Lightweis-Goff offers a reading of Louisa Picquet, The Octoroon as a liminal narrative that challenges the “liberatory associations with slavery in the urban sphere” and “contests the dominant narrative of both sexual and urban slaveries.”

Finally, Isabel Millán contrasts two children books—one by Honduran author Melissa Cardoza and one by Chicana author Gloria Anzaldúa. Employing the concept of autofantasía, Millán demonstrates the political potential of children’s literature to “contest histories of dominance or difference.” Millán argues that for both authors, the incorporation of autobiographical information is crucial to the way both authors challenge xenophobia and queerphobia through children’s literature and “guid[e] readers toward counterhegemonic futurities.”