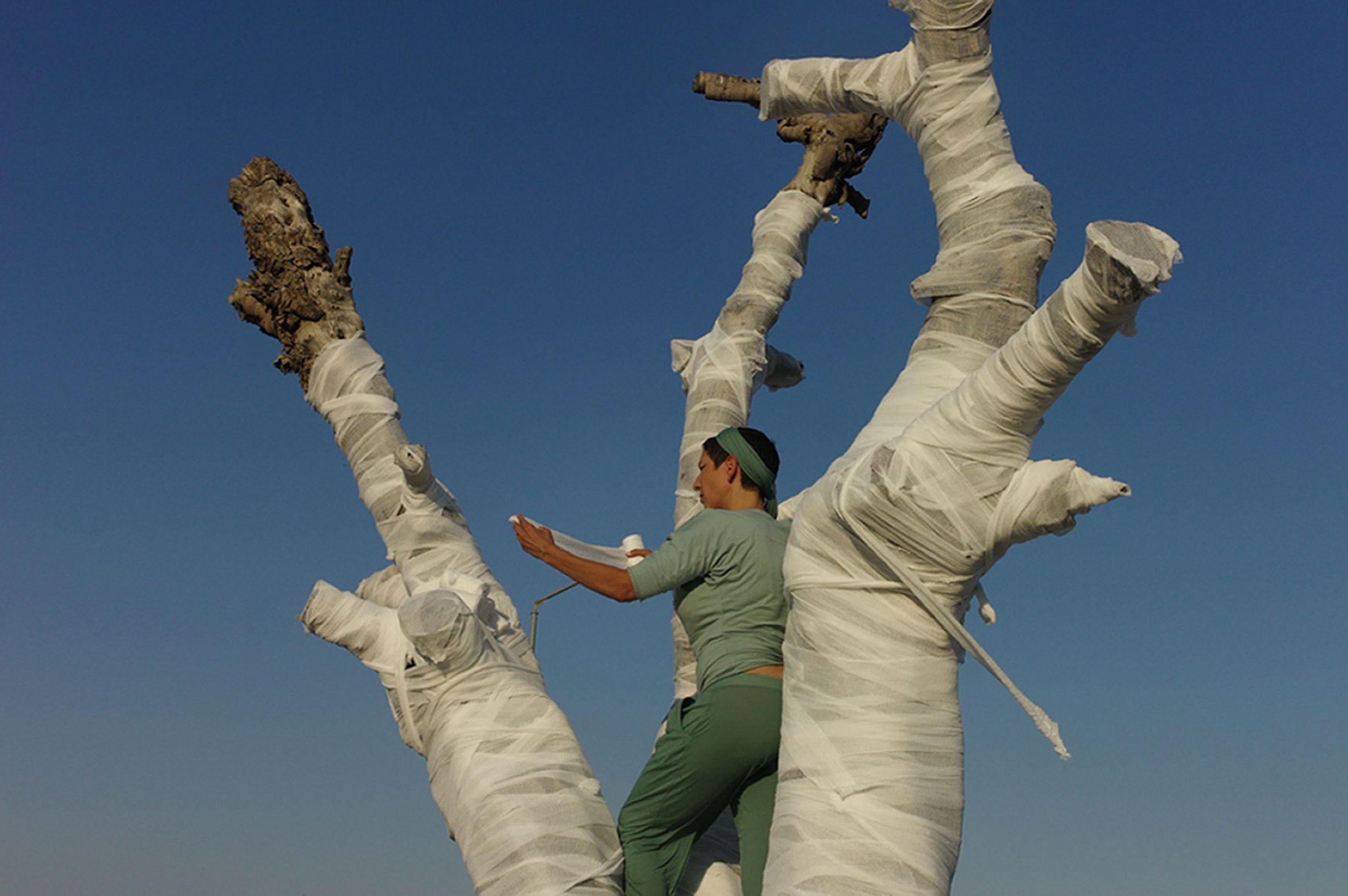 Still from The Olive Tree (2011).
Video recording of performance at the Hizma checkpoint, Jerusalem, 12:52 minutes.
Photo by Alex Levac.
Courtesy of the artist. 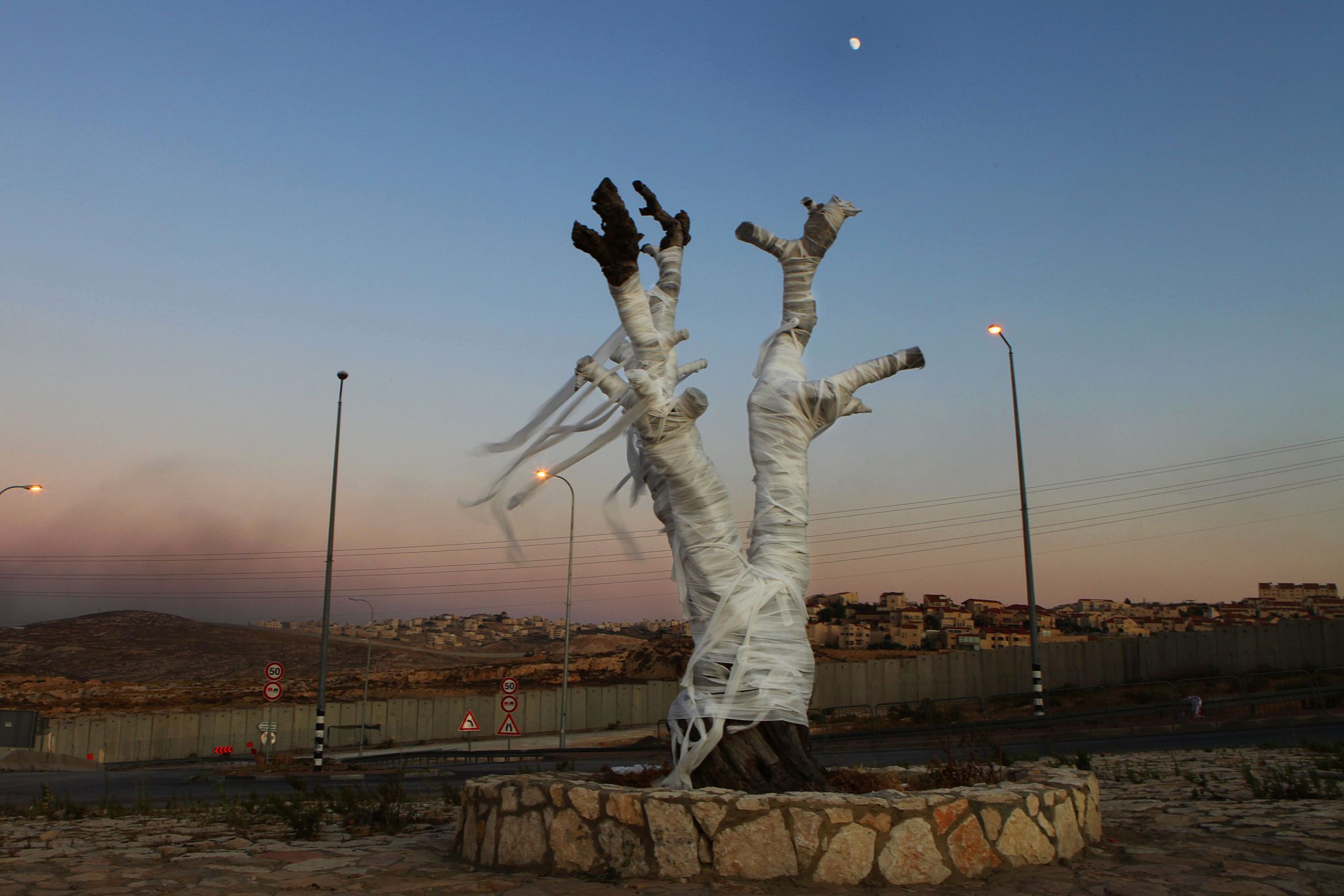 Still from The Olive Tree (2011).
Video recording of performance at the Hizma checkpoint, Jerusalem, 12:52 minutes.
Photo by Rina Castelnuevo.
Courtesy of the artist. 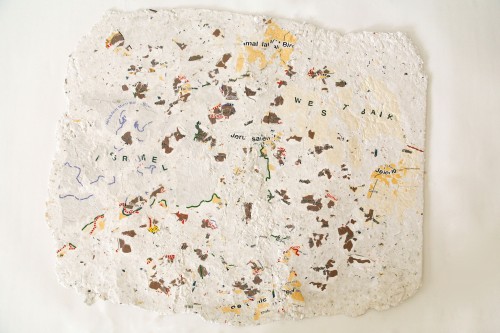 Artist Statement:
Wounded Land grew out of a series of artworks called Border Land, created in 2000–07. Witnessing the violence, new walls, and fences erected during the Second Intifada, I used maps to understand the multiple spatial realities of this period. I walked the geography depicted in the maps, crossing borders back and forth as a photojournalist. I then deconstructed the hegemony inscribed on closure maps of Jerusalem and the West Bank by cutting, bandaging, and sewing them together; by performing these absurd and Sisyphean acts of healing a collective wound that marks the landscape as well as the human body and psyche, I succeeded in conveying the existential deadlock of the conflict.

In Sea of Death, my bandaged body suggests both the slow death of the Dead Sea and human finitude. In the video of my performance in the Old City of Jerusalem, the green thread that sews the closure map also binds the religious quarters of the city together.

The Olive Tree, filmed at a checkpoint, is both a tribute to mothers and a message of hope. On the soundtrack, Ruth Wieder Magan sings Ladino and Hassidic songs and Salam Abu Amneh, traditional Palestinian songs. Both yearn for Jerusalem, the mother of all cities, now a walled city. Their voices soothe me while I bandage the dead olive tree. At sunset, the tree rejoices like a bride as it reunites with Mother Earth.

Biography:
Ariane Littman (born 1962, Lausanne) is the daughter of a British father and an Egyptian mother. In 1981, she left Switzerland to study international relations and Muslim history at the Hebrew University of Jerusalem. Upon completing her undergraduate studies, she changed direction, completing her BFA with honors at the Bezalel Academy of Arts and Design in 1991, followed by an MFA, in 1998. In 1991–94, Littman was assistant curator in the Department of International Contemporary Art at the Israel Museum. She earned another degree in art and aesthetics at the Hebrew University in 2004, and participated in a Jewish-Arab program at the Musrara School of Photography in Jerusalem.

During several years as a freelance photographer, her work alternated between the studio and the field. She covered major events such as Israel’s disengagement from the Gaza Strip in 2005, and in 2006–08 worked as a freelance photographer with Marlene Schnieper, the Middle East correspondent of the Swiss newspaper Tages-Anzeiger. Having taught at various academic institutions since 1998, she is currently a senior lecturer in the Department of Inclusive Industrial Design at the Hadassah Academic College in Jerusalem.

She had her first solo exhibition at the Bograshov Gallery in Tel Aviv in 1992. Since then, Littman has had eight solo shows including A Voyage into the Sublime, Herzliya Museum, 1997, and four at the Jerusalem Artists’ House, 1995, 2001, 2002, 2011. She has participated in several group shows at the Tel Aviv Museum of Art, 1993, 1994, 2006, and Israel Museum, Jerusalem, 1994, 1996, 1998. Among her other group shows are the traveling exhibition Desert Cliché: Israel Now—Local Images, which opened at the Arad Museum and Museum of Art, Ein Harod, in 1996, and made stops at, among other venues, Bass Museum, Miami, and Grey Art Gallery, New York, 1997; After Rabin: New Art from Israel, Jewish Museum, New York, 1998; Between Beauty and Destiny: Three Generations of Israeli Art, Cleveland Center for Contemporary Art, 1998; and Act of State, Centre de la photographie, Geneva, 2010.

After an exhibition of her work on borders and maps of Jerusalem, she was invited to present at Mobile Borders: XIth International Scientific Meeting of the Border Regions in Transition (BRIT), September 2011, co-sponsored by the Geography Departments of the Universities of Geneva and Grenoble. In June 2012, she was invited to participate in the Zurich workshop Cartography & Narratives, organized by the Commission on Art and Cartography of the International Cartographic Association (ICA), in collaboration with the Institute of Cartography and Geoinformation, Eidgenössische Technische Hochschule (ETH) Zurich, and Concordia University, Montreal.

Her work can be found in the collections of the Jewish Museum, Israel Museum, and Herzliya Museum.