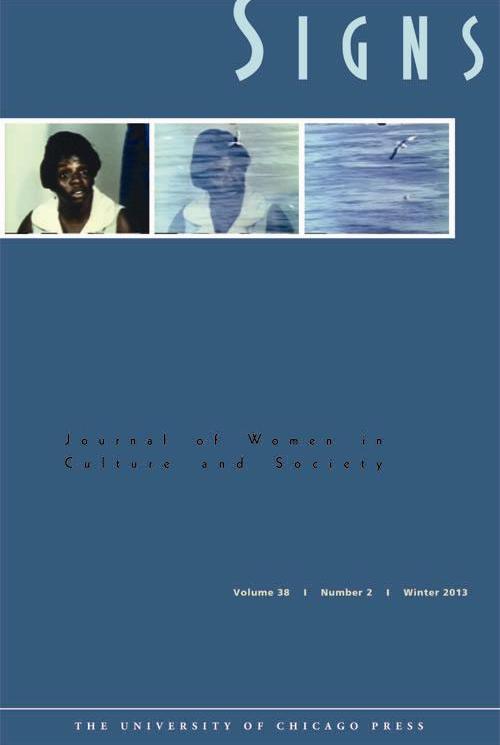 Cover of Signs 38, no.2, featuring stills from Madeline Anderson’s I Am Somebody (1969)

The articles in Signs’s Winter 2013 issue span a range of disciplines, theoretical vantage points, and topics of study. Jonneke Koomen’s “Without These Women, the Tribunal Cannot Do Anything” explores the limits  justice revealed in the nexus of prosecutors, translators, and survivors of genocide, among others, during the International Criminal Tribunal for Rwanda. Megan Moodie outlines the translation of (masculinized, first-world) risk into (feminized, third-world) peril that underpins the enterprise of microfinance in “Microfinance and the Gender of Risk: The Case of Kiva.org.” And Katie R. Horowitz’s “The Trouble with ‘Queerness’: Drag and the Making of Two Cultures” explores the extraordinary differences in presentations of the queer and gendered self through a comparison of drag king and queen performances at a single Cleveland gay bar.

Michiko Suzuki and Shilyh Warren consider two very different cultural productions, at two very different moments of cultural upheaval, in their explorations of Yoshiya Noboku’s The Husband’s Chastity, a serialized novel of gender relations in 1930s Japan, and Madeline Anderson’s I Am Somebody, a documentary study of the raced and gendered dynamics at work during a 1969 hospital workers’ strike in Charleston, South Carolina. And Danielle Taylor Phillips and Jessaca B. Leinaweaver both challenge our perceptions of the boundaries of family formation in their respective studies of the racialization of African American and Irish domestic workers and the curious phenomenon of “practice mothers” at early-twentieth-century universities. Finally, Dana Carluccio challenges the application of tendencies and functions, and reveals their gendered implications, in scientific hypotheses past and present, and Mai Al-Nakib employs the theorizations of Gilles Deleuze in considering the contemporary controversies of Arab feminism.

The entire issue is available on JSTOR.

Articles
“Without These Women, the Tribunal Cannot Do Anything”: The Politics of Witness Testimony on Sexual Violence at the International Criminal Tribunal for Rwanda
Jonneke Koomen

Microfinance and the Gender of Risk: The Case of Kiva.org
Megan Moodie

The Trouble with “Queerness”: Drag and the Making of Two Cultures
Katie R. Horowitz

Moving with the Women: Tracing Racialization, Migration, and Domestic Workers in the Archive
Danielle Taylor Phillips