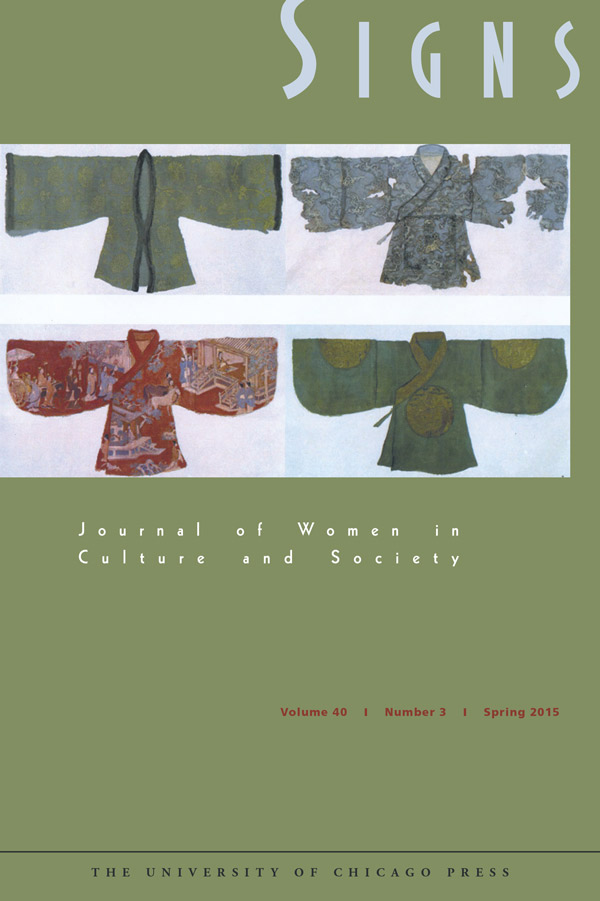 The Spring 2015 issue of Signs contains the winner of the 2015 Catharine Stimpson Prize for Outstanding Feminist Scholarship (Venla Oikonnen’s article “Mitochondrial Eve and the Affective Politics of Human Ancestry”), a cluster of articles on Feminist Sinologies (edited by Nan Z. Da and Wang Zheng), and the inaugural editorial from the new editor of Signs, Suzanna Danuta Walters, Professor of Sociology and Director of the Women’s, Gender, and Sexuality Studies Program at Northeastern University. In this editorial, Walters lays out a bold vision for the future of Signs that builds on the traditions and heritage of the journal while also moving forward through  renewed commitments to feminism’s capacity to ask big questions, to robustly inter- and transdisciplinary scholarship, and to reckoning with the provocations of gender and sexuality studies. Supplementing this vision will be an enhancements to Signs’ online presence, two new initiatives: “Key Concepts,” which will present short essays on foundational concepts in feminist theory, and the “Public Intellectual Project,” through which Signs can “enhanc[e] public discourse from a multivocal feminist perspective.”

In their introduction to the Feminist Sinologies cluster, Da and Wang reconceptualize the term “sinology”—given its associations with the Western imperial gaze—to signal “the multiple, discontinuous, and sedimented narratives of ‘China’ and their recurring specters in global forums.” Pluralizing the term and pairing it with “feminist” offers the chance to emphasize the “rhizomatic nature of China-centered epistemologies” and the power of feminist analysis to uncover the ideological undercurrents of any kind of storytelling on China. The first article in the cluster, Joan Judge’s “Sinology, Feminist History, and Everydayness in the Early Republican Periodical Press,” performs a horizontal reading of women’s periodicals in early twentieth-century China to highlight productive disjunctions in Republican culture, reading for the “blended accommodations” that profoundly transformed the lives of Chinese urban women.

In “Wang Ping and Women’s Cinema in Socialist China,” Lingzhen Wang analyzes the first Chinese socialist female film director, Wang Ping, showing the inadequacy of conventional liberal, radical, and cine-feminist approaches to socialist film. Instead, Wang argues that socialist cinema illustrates the interdependent relationship between women and the socialist system and the interactions among gender and other political, social, and cultural forces. Next, Megan Bryson’s “Religious Women and Modern Men: Intersections of Gender and Ethnicity in the Tale of Woman Huang” examines the retelling of the story of Woman Huang in differing regional and ethnic contexts to demonstrate the coconstitutive nature of gender and ethnicity. Bai scholars, she shows, displace religion and tradition onto older, rural women in order to present Bai ethnicity and culture as modern and masculine. Sharon R. Wesoky’s “Bringing the Jia Back into Guojia: Engendering Chinese Intellectual Politics” examines the relationship between China’s current world-making and feminist theory, arguing that male intellectuals’ current proposals for Chinese alternatives to Western modernities have problems and limitations that would be alleviated by a return to their unacknowledged feminist origins.Despite the occlusion of gender discourse in these male theorists’ works, their endorsements of interconnectedness and relationality as alternative models of modern subjectivity speak back, if unintentionally, to the tenets of their feminist predecessors.

The next two articles in the cluster turn to poetry and literature, respectively, to illuminate the complexities of transnational China from very different perspectives. Nan Z. Da’s contribution is a detailed reading of Zhai Yongming’s collection of poems The Most Tactful Phrases. Da examines Zhai’s work both for its deconstruction of modern China through twenty-first-century Chinese feminist poetics, “laying bare a postsinological world,” and for its use of co-optable female personages to confront the reader with poetic virtuosity that asks “not only ‘how is transnationally constituted China knowable?’ but ‘how can knowing it be pleasurable in ways for which we are already primed?’” Tamara C. Ho’s reading of Wendy Law-Yone’s novel The Road to Wanting offers a Southeast Asian perspective on Sinophone subjectivities, complicity, and transnational solidarity. By tracing the discursive and embodied interactions among the novel’s borderland figures, Ho highlights how ethnicity, race, nationality, and gender operate as dynamically fabricated yet coercive ideological constructs.

Following the Feminist Sinologies cluster, Robert Diaz’s article “The Limits of Bakla and Gay: Feminist Readings of My Husband’s Lover, Vice Ganda, and Charice Pempengco” uses figures from Filipino popular culture  to intervene into scholarly discussions of queer lives in the Philippines, which has primarily focused on the lives of gay men, bakla identities, and cisgendered persons. Through a feminist reading of these queer mediascapes, Diaz troubles both the gendered occlusions produced by the visibility of certain queer subjects and the assumed class dynamics operative within discussions of gay globality.

The issue closes with the winner of the 2015 Catharine Stimpson Prize for Outstanding Feminist Scholarship, Venla Oikkonen’s “Mitochondrial Eve and the Affective Politics of Human Ancestry.” Oikkonen’s essay explores the racial, gender, and sexual politics embedded in technoscientific endeavors ranging from genetic ancestry tests to national genome projects.  Oikkonen traces the invention and rise to prominence within scientific and popular discourses of “Mitochondial Eve,” the most recent common matrilineal ancestor of modern humans.  Building on the work of feminist and postcolonial technoscience scholars, the author investigates how Eve is transformed from a statistical inference grounded in a new technology, the use of mtDNA, to an embodied figure, an imagined ancestor, only to be displaced when biotechnologies introduced, “Y-Chromosome Adam.”  Counter to the notion that the categories of race, gender, and sexuality play no role in scientific studies at the molecular level, Oikkonen shows that geneticists and journalists relied on cultural narratives about kinship to render the embodied figure of Eve symbolically white and thoroughly heterosexual.  Given the ever-increasing explanatory power granted to genetic discourses, “Mitochondrial Eve and the Affective Politics of Human Ancestry” represents an important feminist intervention, a reminder that these discourses continue to be shaped by gendered and racialized affective investments.

Finally, the issue includes reviews of a range of new books, on queer identities and erotics throughout Asia, on the politics of gender and ethnicity on the Sino-Tibetan border, on questions of race and feminine beauty in Indonesia, and on masculinity and sport in China and Korea.