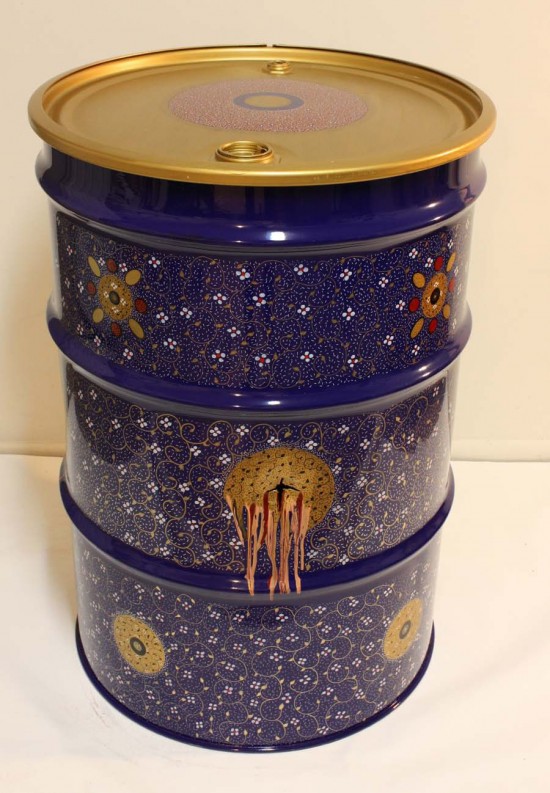 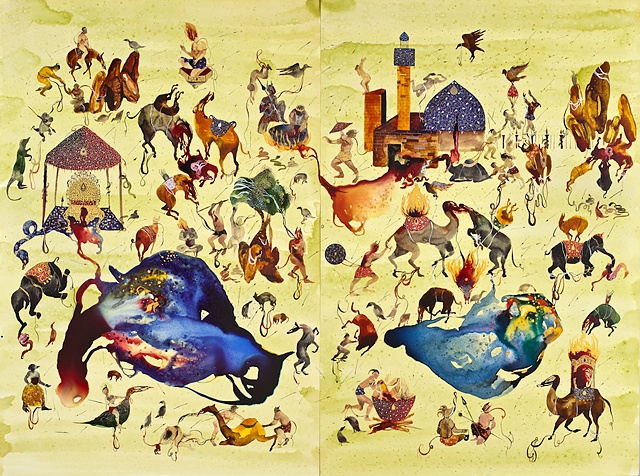 Artist Statement:
Shiva Ahmadi’s works occupy an uneasy psycho-visual space: at once meticulous and loose, playful and somber, mythical yet very much dealing with the real. Much of her paintings are on paper, but also aqua board: a rigid surface best suited for her gouache, watercolor and ink applications. Her grounds are light earthy washes, upon which she builds up degrees of opacity: most opaque is inevitably the color red, generously applied to the point of caking and crackling. The last layer is the most delicate: ornate floral patterns painstakingly applied with metallic gold ink.

Ahmadi’s earlier paintings were a belated manifestation of a doubly latent trauma, the second recalling the first: the invasion of Iraq by the US in 2003, reviving the pain of the invasion of Iran by Iraq in 1980. Her more recent works have taken on a wider sense of instability related to the so-called region: the mounting uncertainty of a tense standoff between two aggressive regimes. But rather than tackle the emotional charges felt by the civilians of these regimes, head on, Ahmadi has instead chosen an unusual representational detour.

Playfully selective with her referencing of miniature painting: the artist is even difficult to place within a now canonized group of contemporary miniature revivalists (mainly out of Lahore, Pakistan). Relying heavily on the traditions of the ancient art form, she has created an allegorical realm where faceless tyrants and religious authorities sit on ornate gilded thrones while subservient minions bow to them.

Sometimes the tyrants seem messianic, with a veil covering their faces and flames behind their heads, some of them are the guardians of nuclear reactors, which float on clouds. The minions are often festive buffoons, monkeys and dogs: they kiss feet, they juggle grenades and might even be restrained by leashes.

Other animals include elephants and camels floating on candy-like clutter or stomping on highly ornamental carpets: except the red of the carpet is also a deep pool of blood, the clutters of candy are also cluster bombs, bullets, and other projectiles.

Her painterly bag of tricks (loose splatter vs. tight rendering, etc.), her intriguing iconography, and the specificity of the geopolitics referenced make Ahmadi’s work at once lush and seductive but ultimately destabilizing and uneasy. This malaise is the artist’s inherently critical stance towards power, be it the dictatorial authority of the worlds she left behind in her native Iran or the more veiled forms of so-called soft and democratic authorities exercised upon her in her current American context.

Biography:
Shiva Ahmadi (born 1975, Tehran) currently lives in the United States. She received her BFA from Azad University, Tehran, in 1998; MA and MFA degrees from Wayne State University in 2000 and 2003, respectively; and her MFA from Cranbrook Academy of Art in 2005. She is a painter who works not only on two-dimensional surfaces, but also on oil barrels, which function as both content and surface in her work.

She was nominated for an Altoid Award by the New Museum, New York, in 2008, and received a Kresge Artist Fellowship in 2009. Her work was reviewed in The Boston Globe, 2007; The New York Times, 2008, 2009, 2010; Art in America, 2009; and The National, UAE News, 2012. She  has taught at the Birmingham Bloomfield Art Center, Birmingham, Michigan; University of Michigan, Ann Arbor; and Wayne State University, Detroit.