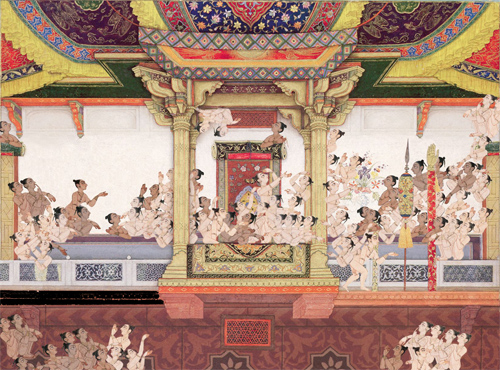 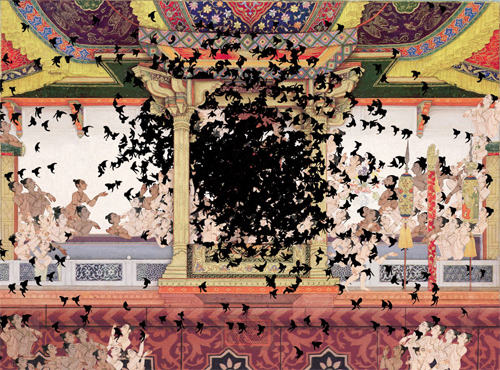 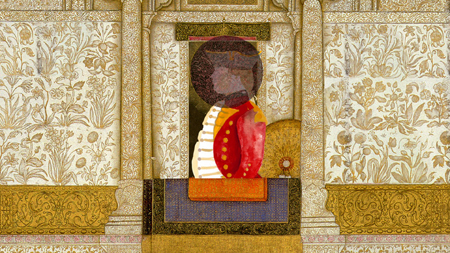 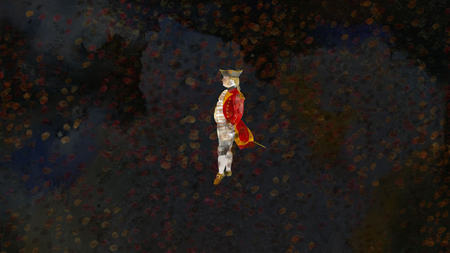 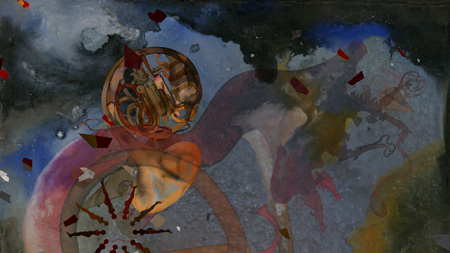 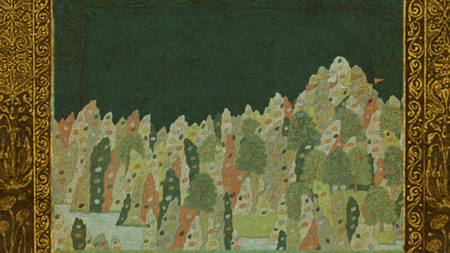 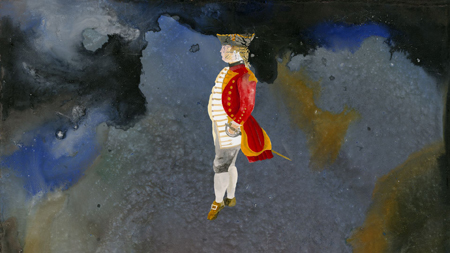 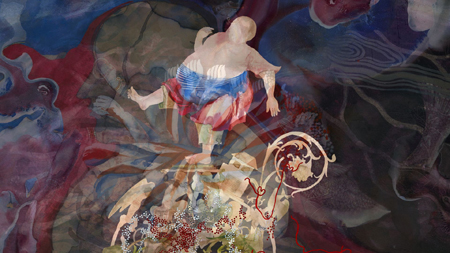 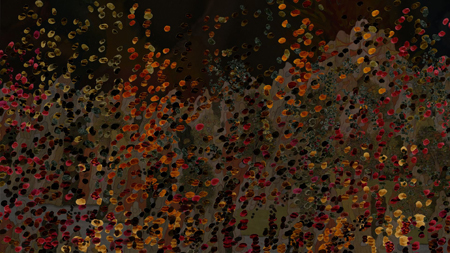 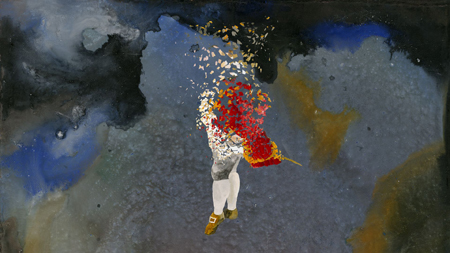 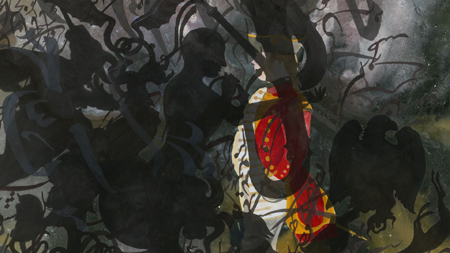 Artist Statement:
The digital animation SpiNN (2003) is a pun on the cable channel CNN. It depicts a mass of spiraling, abstracted forms, hovering like a swarm of angry black crows or bats that coalesce into the image of a Mughal durbar hall (the space where the Indian emperor would meet his ministers or subjects). The hall is incongruously populated by gopi women (devotees of Krishna), whose black hairdos comprise the central motif. This “hair bird” is a symbolic representation of feminist agency rather than a direct statement of political resistance.

In the HD video animation The Last Post (2010), inspired by the colonial history of the Asian subcontinent and the opium trade, an employee of the British East India Company serves as both metaphor for the collapse of Anglo-Saxon hegemony over China and a lurking threat in the imperial rooms of the Mughal Empire. The piece also makes reference to Company Painting, a European-influenced eighteenth-century Indian style of painting that catered to European tastes by documenting the country’s exotic plants, animals, and architecture.

In Unseen Series (2011), large-scale HD projections reveal the nighttime landscape, recontextualizing my drawings by shifting their scale and re-rendering them amid foliage and architecture. The projection of the multi-armed female form is a metaphor for Doris Duke herself—mythical, majestic, monumental—looming over Shangri La, her spectacular home overlooking the Pacific, where her ashes were sprinkled. Shangri La’s American orientalism, brilliant craftwork, and collections from Muslim cultures make it both engaging and contradictory.

Biography:
Shahzia Sikander (born 1969, Lahore) studied the Indo-Persian style of miniature painting at the National College of Arts in Lahore, Pakistan, receiving her BFA in 1992. She also earned an MFA in 1995 from the Rhode Island School of Design. Sikander has developed an original approach, incorporating elements of popular culture and contemporary theory in dialogue with this historical painting style. By referring to the traditional forms of miniatures, she conjures associations with imperialism, storytelling traditions, and popular mythology. Yet by unraveling the conventions of miniaturist painting, she also deconstructs the postcolonial legacy of the Pakistan region. During the 1990s, Sikander’s work had a major following at the National College of Arts, inspiring many others to likewise recontextualize the Indo-Persian miniature painting tradition.

Sikander’s art confronts and interrogates the perceptual distances between the cultures designated as “East” and “West,” a poignant and fraught theme in the current political climate. Working in the mediums of drawing, painting, animation, installation, and video, and employing ideas that are often subversive and polemical in nature, Sikander creates artworks that are physical manifestations of the dynamic of our globalized world. Among Sikander’s primary materials are graphite, ink, and gouache, and in 2001 she began working in digital animation, setting her miniatures in motion. Her use of animation, combined with her layering of images and play between figural and abstract forms, destabilizes Sikander’s representations and visually embodies her central concerns of transformation, societies in flux, and disruption as means to cultivate new associations.