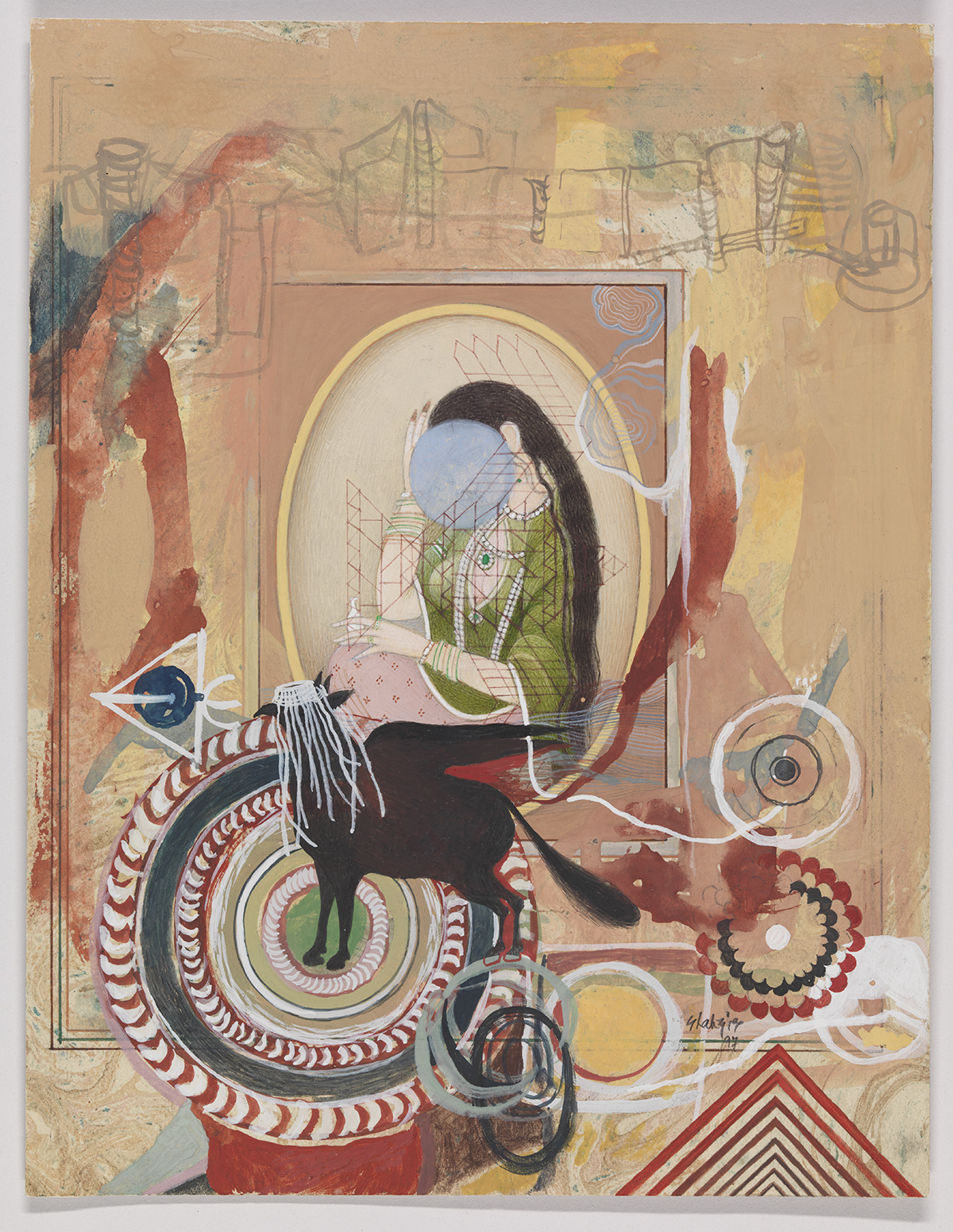 Shahzia Sikander, Ready to Leave (1997). Transparent and opaque watercolor, tea, and graphite pencil on marbled paper, 97/8 × 79/16 in. © 1997 by Shahzia Sikander. Permission to reprint may be obtained only from the artist. This work appears on the winter 2019 issue of Signs.

Artist Statement
Ready to Leave was made in response to the straightjacketing that I encountered in terms of my biography in the mid- to late nineties in the US.  The journey to explore the personal had already started in Pakistan in my work.  With the distance from “home,” the process of self-actualization came into focus. Who I was and what I represented became limiting constructs as the burden projected onto me to represent “a culture” felt not just unfair but alien. Becoming the other, the outsider, through the polarizing paradigm of East/West, led to an outburst of iconography of fragmented bodies, androgynous forms, mythical creatures of multiple identities. I started to manipulate the established forms and pictorial conventions of miniature paintings further through abstract gesture and ink.  Unmediated spontaneous drawing over the precise and delicately painted miniatures created an encounter between the two surfaces that was visually and emotionally explosive. Unlike graffiti, I was violating my own work in an attempt to simultaneously unlearn and learn, and to understand how to deconstruct a stereotype to open a dialogue.


Artist Biography
Born in Lahore, Pakistan, in 1969, Shahzia Sikander took up the traditional practice of miniature painting during Muhammad Zia-ul-Haq’s military regime, at a time when the medium was deeply unpopular among young artists. Sikander’s pioneering practice takes classical Indo-Persian miniature painting as its point of departure and challenges the strict formal tropes of the genre by experimenting with scale and various forms of new media. Informed by South Asian, American, feminist, and Muslim perspectives, Sikander has developed a unique, critically charged approach to this time-honored medium––employing its continuous capacity for reinvention to interrogate ideas of language, trade and empire, and migration. A recipient of a MacArthur Fellowship (2006), Sikander has been the subject of many major international exhibitions, recently including the Guggenheim Museum, Bilbao, Asia Society Hong Kong Center, = and MAXXI | Museo nazionale delle arti del XXI secolo in Rome.