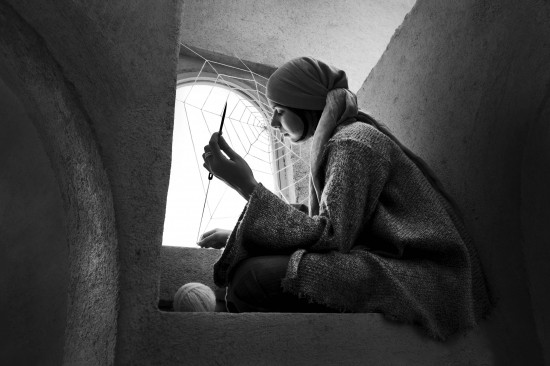 Artist Statement:
Miss Butterfly is going to meet the sun; as she is looking for a way out and reaching for the light, she becomes caught in a spider’s web. Moved to compassion after observing Miss Butterfly’s grace and delicacy, the spider comes to an agreement with her. He tells her to bring one of the insects from the dark cellar and tie it up in the spider’s web for him. In turn, the spider will show her the way out and lead her into the light. But after hearing the insects’ stories, Miss Butterfly feels pity for them and eventually returns to the spider empty-handed, with injured wings; and she makes herself caught in the web to be the spider’s food. Impressed by her courage, the spider sets Miss Butterfly free and shows her the way out to meet the sun. Miss Butterfly calls all the other insects in the cellar to share her freedom with them, but she gets no response. She is so frustrated by their reaction that she opens wide her weary wings and flies toward the sun.

Biography:
Shadi Ghadirian (born 1974, Tehran) received her BA in photography at Azad University, Tehran. She lives in Tehran, where she works at the Museum of Photography; she also serves as photo editor of the Web site Women in Iran (www.womeniniran.com), as well as manager of the first Iranian Web site devoted to photography (www.fanoosphoto.com).

Ghadirian’s photographs epitomize the central dilemma facing Iranian women today: whether to conform to tradition or undertake modernization despite a difficult environment. Yet her work is not only about Iranian women. Ghadirian addresses the issues faced by women around the world—censorship, religious restrictions, the relationship of the individual to the state, and self-fulfillment. Her photographs have been exhibited and recognized on many continents as grasping the challenges experienced by women everywhere.