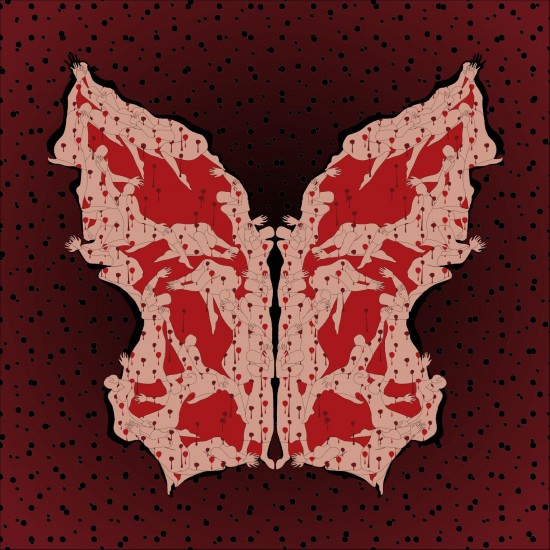 Parastou Farouhar, Ashura Butterfly, from the seven-part series Butterfly, 2010
Digital print on photo paper, 39 3/8 × 39 3/8 in.
Courtesy of the RH Gallery, New York, and the artist.

Artist Statement:
The production of identity, and the repressive mechanisms by which it is reified, comprise the focus of my work. My homeland, Iran, is a constant theme in my artistic practice, but the conception is complex and continuously in flux. Beyond Iran, there is also the collective memory of Germany, where I have lived since 1991. When I arrived there, I was Parastou Forouhar, but I have since become “Iranian.” Every space I inhabit is accompanied by a feeling of displacement.

The interaction of contradictory meanings is another central theme in my work. In my series of digital prints and wallpaper entitled Butterfly, the delicate form of these insects is contrasted with camouflaged scenes of torture. Only when viewers look at these images a second time, do they notice that the butterfly wings contain wounded and gagged human figures. This series is intensely personal for me, as my mother’s name, Parvaneh, is the Farsi word for “butterfly.” It has become a kind of memento mori for the political assassination of my parents in 1998 in Iran.

The four-part photographic piece Friday addresses the reciprocal effect of the veiled and unveiled body. The unveiled skin of the woman’s fingers is charged with eroticism, contrasting with the cloth of the veil. This duality invites viewers to challenge their assumptions and gain insight into the complexity of the clichéd trope of Iran as veiled woman.

Biography:
Parastou Forouhar (born 1962, Tehran) lived in Iran until 1991, when she relocated to Frankfurt, Germany, where she still resides. She studied art at the University of Tehran, joining the first enrolled class in 1984 after a two-year period in which the nation’s universities were closed in order to restructure the educational system and implement, in Forouhar’s words, “thorough Islamization.” In addition to her bachelor’s degree from the University of Tehran, Forouhar received a master’s degree from the College of Art, Offenbach, Germany. The Islamic Revolution’s transformative impact on Iran, paired with the omnipresent collective memory of violence in Germany, has generated a body of work marked by the construction of a complex identity informed by these histories and experiences.

Forouhar’s digital drawings are often labyrinths developed out of patterns inspired by classical Persian ornamentation. Forouhar depicts figures trapped inside the borders of Persian ornamental designs—a metaphor for her Iranian homeland and the violence it has witnessed. This violence tragically touched Forouhar’s own life when her parents, Dariush and Parvaneh, respected intellectuals who fought for democracy in Iran, were brutally murdered in their home on November 21, 1998. Forouhar has persistently campaigned for a proper investigation into the extra-judicial executions of her parents and other activists murdered in Tehran in fall of 1998. Her commitment to justice provides one of the foundations of her work.