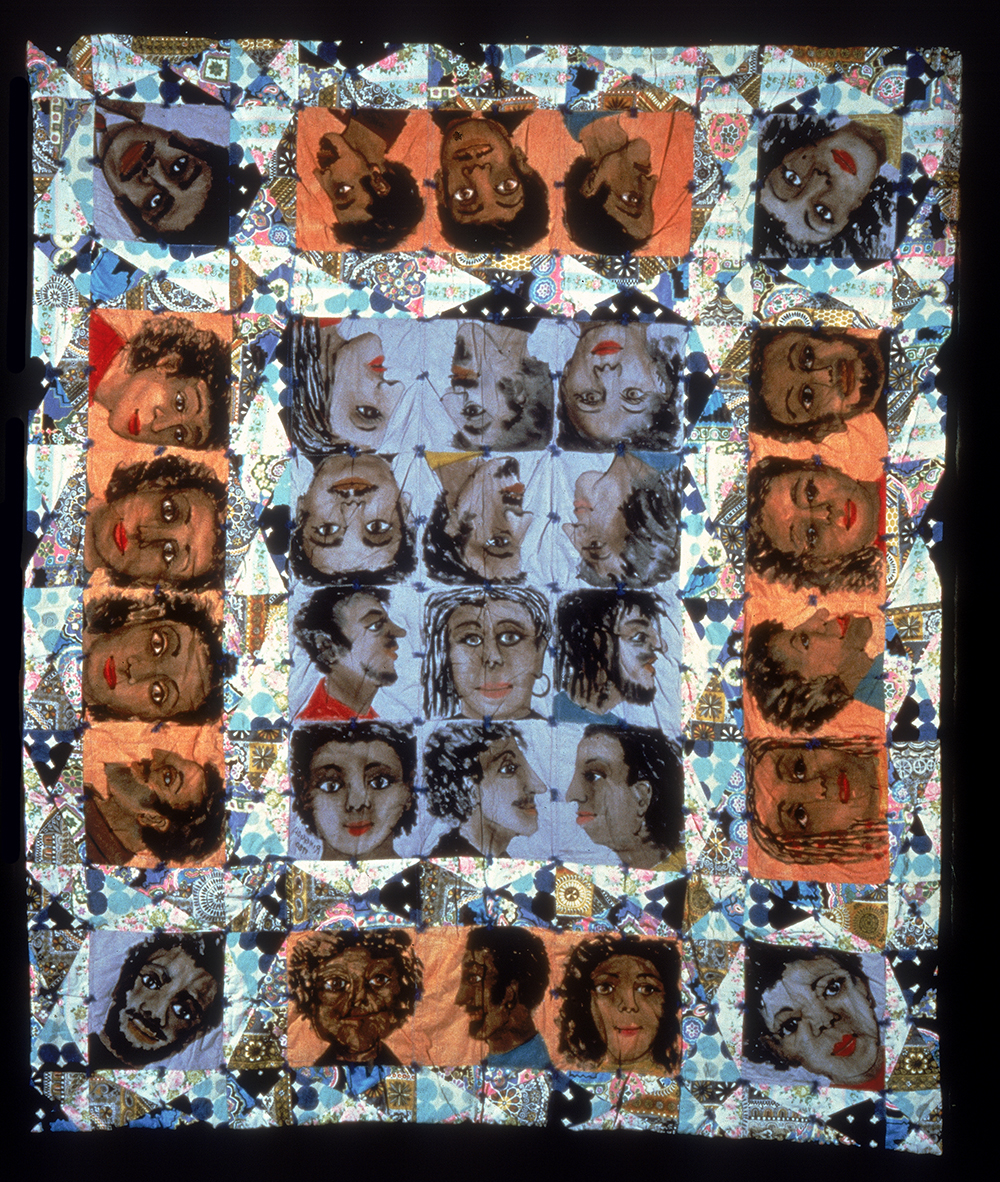 Artist Statement
I became an artist in the tumultuous 1960s. By the early 1970s I had developed both vision and voice as a black woman artist in America.

I went to West Africa in the 1970s and returned home inspired to write my memoir. We Flew Over the Bridge: The Memoirs of Faith Ringgold was published in 1995. It took me fifteen years to get it published. During that time I wrote and painted story quilts and began to create masked performances to tell my story. I had been working in collaboration with my mother, Mme. Willi Posey, a dressmaker and fashion designer. We made our first quilt in 1980.

News of the great jazz saxophonist, Sonny Rollins, a childhood friend, blowing his horn on the Manhattan Bridge so that he would not disturb his neighbors, inspired the painted story quilt, Tar Beach. That story of Cassie Louise Lightfoot flying over the George Washington Bridge became my first children’s book. I have published fourteen children’s books to date. 1990 found me in France painting the French Collection and writing the story of Willia Marie Simone, a self-styled African American woman artist who went to Paris to be an artist in the 1920 during the Harlem Renaissance. The American Collection came next, and the story quilts and children’s books continued to document my artistic production.

In 1992 my husband, Birdie, and I moved from Harlem to Jones Road in Englewood, New Jersey, to build a studio. However, our white neighbors (unsuccessfully) sought to deny us the freedom to live there. Freedom, you know, is not free—it took me six years to realize my dream of a beautiful studio surrounded by a beautiful garden. Inspiring images of my ancestors on the Underground Railroad now appeared in my new landscape paintings of Coming to Jones Road under a Blood Red Sky. Icons of black men and women making the music the whole world loves, the music we brought to America along with the pain of slavery, was now a new inspiration. “Mama Can Sing” and “Papa Can Blow” are the ever- reassuring realities of black life I depend on during difficult times.

Recent work includes Our Ancestors: stories about the world’s children who, faced with life in a world at war, have forgotten how to play. We call upon our ancestors who would surely bring love and happiness into their lives. Where would we have been without them?  I am in the process of finding inspiration for an uplifting new body of work about aging.

Artist Biography
Faith Ringgold lives and continues to work in Englewood, NJ. She began her career in the early 1960s as a painter, an activist, feminist, and an educator.  Her protests, events, happenings, and exhibitions of the sixties and seventies took a stand for freedom of speech and equality; she broke ground and opened (museum) doors for artists of color and women. Today, she is best known for her painted story quilts and her illustrated children’s books. Ringgold’s first book, Tar Beach (New York: Crown, 1991), was a Caldecott Honor Book and winner of the Coretta Scott King Award for Illustration, among numerous other honors. Ringgold has illustrated fourteen children’s books, eleven of which were also written by her.  She has exhibited in major museums in the US, Europe, South America, Asia, Africa, and the Middle East. She is in the permanent collection of many museums, including the Solomon R. Guggenheim Museum, the Metropolitan Museum of Art, and the Museum of Modern Art.