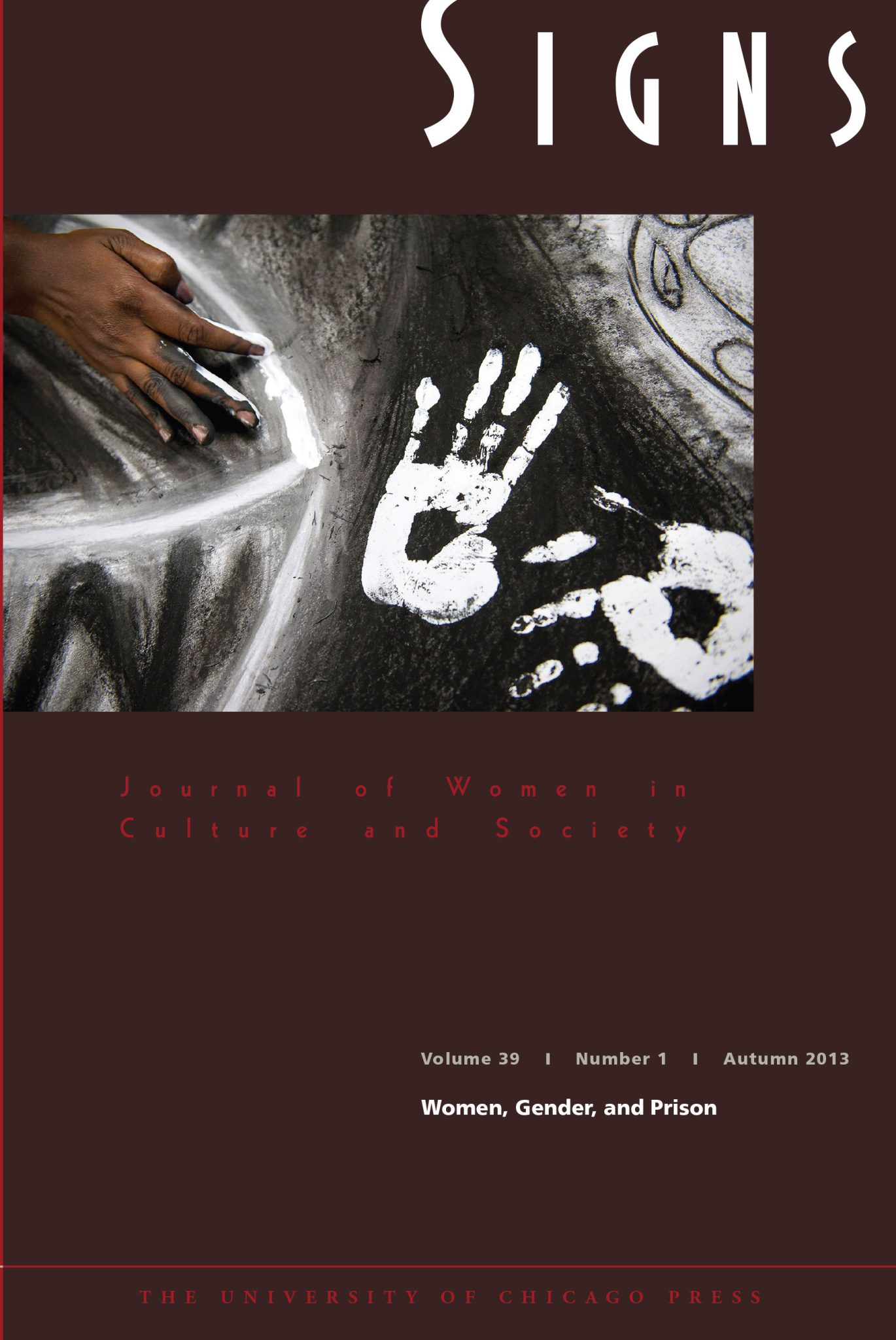 Cover of Signs 39, no. 1 featuring a detail from Toni Bowers and Natasha Ward’s untitled mural

The past forty years have witnessed a dramatic increase in the number of women imprisoned worldwide; over half a million women are now incarcerated, and the growth rate of women’s imprisonment has outstripped that of men’s. Despite neoliberal commitments to cut back the state, many states have dramatically increased spending on policing and imprisonment at the same time that the privatization of prisons and the diffusion of carceral power have escalated. This special issue of Signs: Journal of Women in Culture and Society, available on JSTOR, addresses these troubling and complex trends, bringing incisive feminist and intersectional critical analysis to bear on the experiences of imprisoned women in diverse geographical and historical contexts, the raced-gendered logics through which carcerality operates, and the role of incarceration and policing in producing gendered, raced, and classed national subjects. The issue features cover art by Toni Bowers and Natasha Ward, who are currently incarcerated in Tutwiler Annex, an Alabama women’s prison.

Andriani Fili, in “Women in Prison: Victims or Resisters? Reflections on Representation from Greece,” provides an overview of the criminological literature on women prisoners, which operates primarily within a resistance/domination binary. Fili uses the example of the recent rebellions by women prisoners in Eleonas Thiva Prison for Women to complicate these assessments and to call for a thoroughly interactional conception of agency. G. Geltner’s “A Cell of Their Own: The Incarceration of Women in Late Medieval Italy” further complicates the picture of women’s incarceration: though women were underrepresented in medieval prison populations, women’s wards were incorporated into prisons nearly from their advent, challenging the view of prisons as a historically male domain. Excavating the gendered logic of racialization that underwrites US prison systems, Sarah Haley examines Georgia’s 1908 prison reform law, which forbade “women” from serving on chain gangs. In practice, however, black women were regularly subjected to both chain gang labor and domestic labor in white households, thus demonstrating that “black women’s humanity was illegible,” an understanding that stood in continuity with black women’s positioning during slavery and worked in concert with the economic regime of the Jim Crow South.

Several articles explore the multifaceted ways in which gendered control within the prison works to shore up national ideals and systems of race and class. Detailing how Sri Lanka’s Methsevana State House of Detention serves as a “site of gendered social control,” Jody Miller and Kristin Carbone-Lopez “trace how vestiges of British colonial law intersect with Sinhala Buddhist nationalism, militarization, and the gendered liberalization of Sri Lanka’s economy to heighten national anxieties about women’s sexuality and sexual practices, culminating in penal excesses directed at those engaged in commercial sex.” Lynne Haney continues this examination of prison as a site of gendered regulation in her “Motherhood as Punishment: The Case of Parenting in Prison.” Here, Haney uses the case of an alternative punishment system, California’s prisons for female offenders and their children, to sound a cautionary note regarding the proliferation of gender-sensitive, decentralized institutions. Haney finds that “what began as a promising alternative to punishment morphed into its own form of power and control.” Constanza Tabbush and María Florencia Gentile, too, examine the regulation of mothering in prison. Tracing the affective economies of mothering in Argentine prisons, they note two regulative regimes in operation: Until their children reach age four, women who parent in prison are treated as “biological reproducers of the nation.” After age four, children are no longer allowed in prison, and mothers become “moral threats to their own children” and, particularly for migrant mothers, threats to the Argentine nation.

Sarah Pemberton’s article, “Enforcing Gender: The Constitution of Sex and Gender in Prison Regimes,” compares the legal treatment of transgender prisoners in the United States and the United Kingdom. Drawing on Michel Foucault’s work on sovereignty, governmentality, and discipline, Pemberton demonstrates that these systems of power interact not only to reinforce a binary conception of sex and gender but also to produce violent forms of masculinity and to subject transgender prisoners to heightened risks of violence. In “Gendering Transnational Criminality: The Case of Women’s Imprisonment in Peru” Camille Boutron and Chloé Constant show that women’s prisons in Peru “bear … the traces of colonial practices of racialization, republican conceptions of race- and class-specific feminine virtues, and the political repression of social movement activism in the 1980s and 1990s.” The feminization of poverty within contemporary neoliberalism has meant that women have turned to delinquency for survival, and women who “transgress traditional social roles” become targets of reform through the penal system.

Through an in-depth critical reading of the US National Prison Rape Elimination Commission’s June 2009 report, Jessi Lee Jackson argues that prisons are a site of both bio- and necropolitical sexual regulation. Because the prison regime is itself infused with sexual control and coercion, Jackson argues, proposals that aim to prevent rape through heightened state surveillance and control will only serve to heighten the sexual violence that prisoners face. Jerry Flores continues the examination of the state production of violence through his analysis of a California juvenile detention center for girls. Rather than accepting the discourse of the “new violent girl,” Flores documents how correctional staff “encourage, condone, and co-opt violence” for their own ends in order to reduce their own workload or maintain order and hierarchies within the institution.

Sabrina Mahtani’s “Women and the Criminalization of Poverty: Perspectives from Sierra Leone” examines how the severe poverty experienced by many women in Sierra Leone leads to their coming “in conflict with the law.” Women who are unable to repay loans taken out to make ends meet, including from microlending agencies, are often imprisoned under 1916 Larceny Act, a law enacted during British colonial times. Mahtani marshals a host of evidence to argue that “international and domestic gender reform efforts need to incorporate and support this neglected population as part of wider gender justice efforts.” Finally, Carol Jacobsen and Lora Bex Lempert examine the disparities in commutation of life sentences in Michigan. Noting that clemency “has become [a] hostage in [the] war on crime,” Jacobsen and Lempert analyze the power dynamics of the public commutation hearings for eleven women, finding that the hearings function as yet another means of gendered social control within the penal system. These hearings, they argue, are as “fictions of equity,” and the state’s flattened understanding of criminality forecloses any possibility of understanding these women and their crimes as embedded within a gendered social context.

Women in Prison: Victims or Resisters? Reflections on Representation from Greece
Andriani Fili

A Cell of Their Own: The Incarceration of Women in Late Medieval Italy
G. Geltner

“Like I Was a Man”: Chain Gangs, Gender, and the Domestic Carceral Sphere in Jim Crow Georgia
Sarah Haley

Motherhood as Punishment: The Case of Parenting in Prison
Lynne Haney

Emotions behind Bars: The Regulation of Mothering in Argentine Jails
Constanza Tabbush and María Florencia Gentile

Enforcing Gender: The Constitution of Sex and Gender in Prison Regimes
Sarah Pemberton

“Staff Here Let You Get Down”:
The Cultivation and Co-optation of Violence in a California Juvenile Detention Center
Jerry Flores

Women and the Criminalization of Poverty: Perspectives from Sierra Leone
Sabrina Mahtani