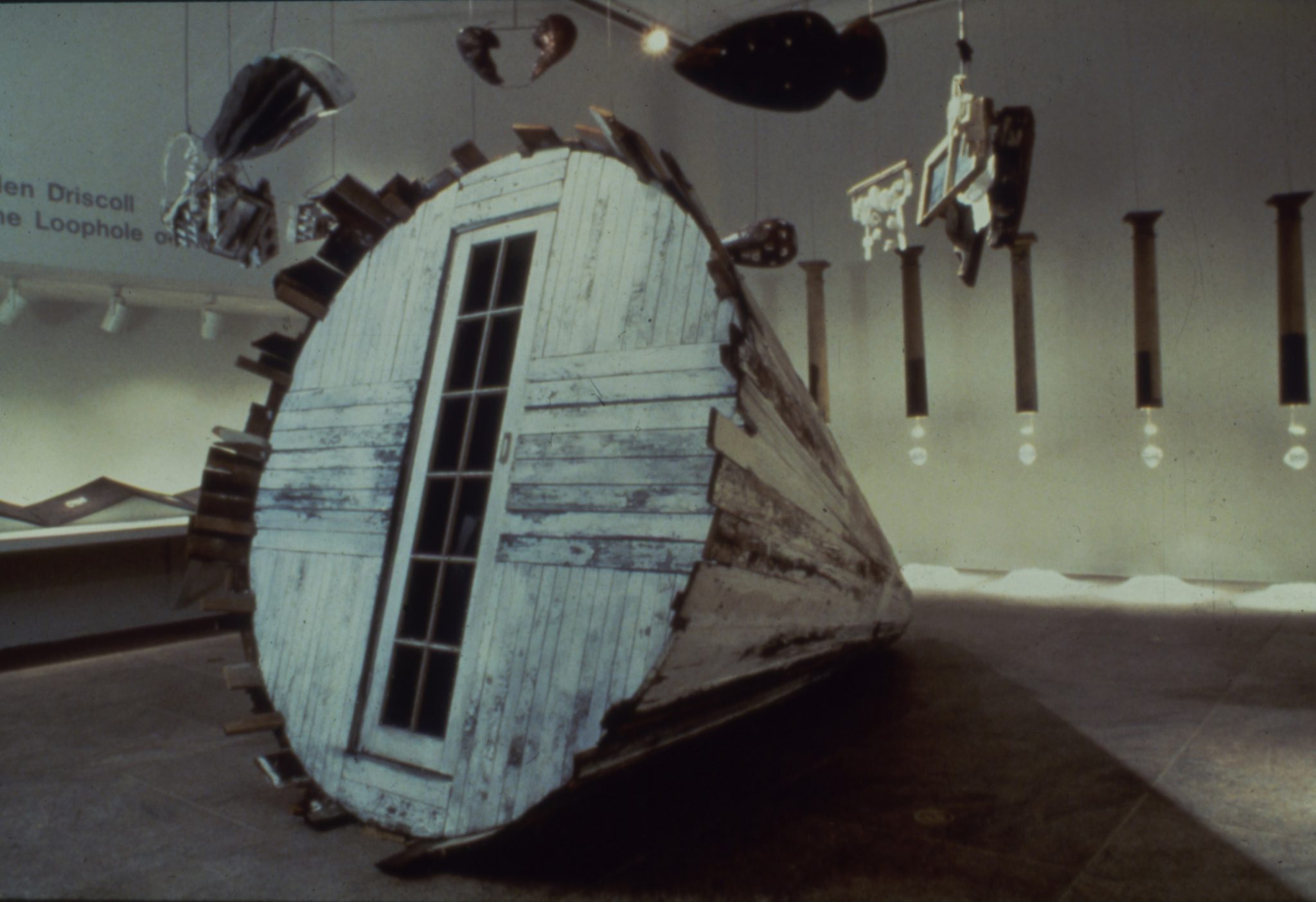 Ellen Driscoll, The Loophole of Retreat, 1990–91. 13’ x 8’ diameter wooden cone, 12 mixed media objects on motorized wheel, 7 suspended columns with interior lights receiving shadow images on salt piles on the floor, and a 22’ x 22” accordion book. Photo by George Hirose. © 1990–91 by Ellen Driscoll. Permission to reprint may be obtained only from the artist.

Artist Statement
Based on Harriet Jacobs’s Incidents in the Life of a Slave Girl, this piece takes its title from a chapter in her book. The installation invites viewers into the central camera obscura one at a time. In the pitch-dark interior, rocked by slight movement of the cone’s round form, the viewer’s eyes dilate slowly to apprehend a series of fleeting black-and-white images created by the lexicon of objects moving outside on the wheel. “Driscoll’s impulse to use scattered parts and a moving image in her model literalizes the conditions of fragmentation and homelessness.” [1] “For Jacobs, the loophole was the break in the wall, the fissure in the system that offered some promise of an embodied participation in the world.”[2]

Artist Biography
Ellen Driscoll makes sculpture, drawings, and public installations. Her work illuminates hidden narratives in both sociopolitical histories and in material culture, and redirects the spectator’s gaze in serendipitous, unexpected ways. She instigates slight shifts of perception that will provoke a wobble in the axis of certainty, creating openings for perceptual realignment. Ms. Driscoll has been awarded fellowships from the Guggenheim Foundation, the National Endowment for the Arts, the Bunting Institute at Harvard University, the New York Foundation for the Arts, the Massachusetts Council on the Arts, the LEF Foundation, the Rhode Island Foundation, Anonymous Was a Woman, a 2014 Fine Arts Award from the American Academy of Arts and Letters, and a 2015 Siena Arts Institute Fellowship. Her work is included in collections including the Metropolitan Museum of Art and the Whitney Museum of Art. She is program director of studio Arts and visiting professor of sculpture at Bard College.